Nominations due Oct. 1 for Gish Award for courage, tenacity and integrity in rural journalism 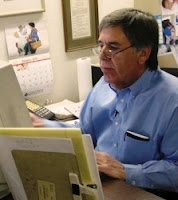 The Institute for Rural Journalism and Community Issues seeks nominations by Oct. 1 for the Tom and Pat Gish Award for courage, tenacity and integrity in rural journalism. Last year's winners were Stanley Nelson (right) and the weekly Concordia Sentinel of Ferriday, La., for investigating an unsolved murder from the civil-rights era, naming and interviewing a living suspect. (Read more)

The award is named for Tom and Pat Gish, who published The Mountain Eagle in Whitesburg, Ky., for more than 51 years. Tom died in 2008; Pat has health issues but remains publisher, and their son Ben is editor. The Gishes have withstood advertiser boycotts, business competition, declining population, personal attacks, and even the burning of their office to give their readers the kind of journalism often lacking in rural areas. The family won the 2010 Eugene Cervi Award from the International Society of Weekly Newspaper Editors, and Tom and Pat Gish were the first winners of the award named for them.

Other winners of the Gish award have been the Ezzell family of The Canadian (Tex.) Record, in 2007; Jim Prince and Stanley Dearman, current and former publishers of The Neshoba Democrat of  Philadelphia, Miss., in 2008; Samantha Swindler, editor-publisher of the Headlight Herald in Tillamook, Ore., in 2010 for work as editor of the Corbin, Ky., Times-Tribune and managing editor of the Jacksonville (Tex.) Daily Progress.

The Institute seeks nominations that measure up, in major respects, to the previous winners. Nominatons should explaining how the nominees show the kind of exemplary courage, tenacity and integrity that the Gishes demonstrated. Documentation does not have to accompany the nomination, but is helpful in choosing finalists, and additional documentation may be neded.