The life expectancy of the average American man increased by 2.1 years from 1999 to 2009, but only 15 percent of all rural and exurban counties matched that increase, and in 158 of them, male longevity declined, according to data compiled by the Institute for Health Metrics and Evaluation at the University of Washington.

Counties where men's lifespan is growing shorter in rural America are clustered in Appalachia, the deep South and Southern Oklahoma, report Bill Bishop of the Daily Yonder and Roberto Gallardo of Center for Rural Affairs. The data suggest that rural men are "simply not keeping up with the health advances in the rest of the country," they write. Of the 50 rural or exurban counties with the largest declines in male longevity, 29 were in coal-producing counties in Kentucky, Tennessee, Virginia or West Virginia. Six were in Oklahoma and four were in Georgia. (Yonder map; click on image for larger version) 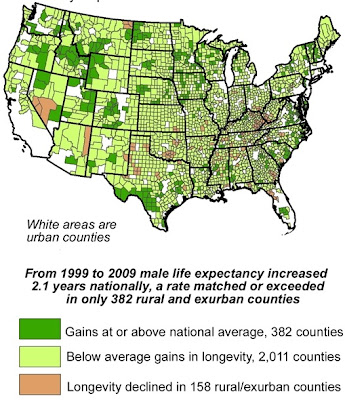 Bishop and Gallardo write that men were already living shorter lives in these counties than the national average before 1999; but over the last decade, men's short lives grew shorter. States with the ten counties where men's longevity shortened the most are Tennessee, Kentucky, West Virginia and Mississippi. Five of those counties are in Kentucky and three are in West Virginia. The states with the 10 counties where men's lives grew longer are Washington, Arizona, Texas, Utah, Pennsylvania, Alabama and Minnesota. (Read more)
Written by Ivy Brashear Posted at 8/21/2012 04:01:00 PM