Forest Service suspends 'burn out' policy in West; shift requires it to fight every fire 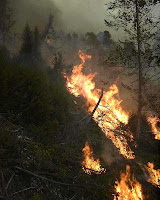 The U.S. Forest Service has temporarily suspended a long-standing policy of allowing small fires in the West to burn out, according to a memo from the agency's deputy chief of forestry. Nathanael Massey of Environment & Energy News reports that "while the memo acknowledges the necessity of employing fire as a tool of restoration, noting that suppression of all fires 'is not a desirable approach in the long-run,' it cites the need to protect life and personal property -- as well as budgetary concerns -- in its decision." The current elevated fire risk, he writes, is a result of higher-than-average temperatures and a profusion of fuel, the product of nearly a century of fire suppression policies. (Wildlandfire.com photo)

The decision, while not a direct reversal of policy, does represent a departure from that practice of natural restoration, said Jennifer Jones, a Forest Service spokeswoman. "We realize that we are making some trade-offs here," she told Massey. "We're working within short-term fiscal restraints, and that almost always requires making tough choices." The Forest Service's suppression budget was cut 6.3 percent this year, she added, while the country has experienced a rise in fire severity.
Written by Amy Wilson Posted at 8/22/2012 12:13:00 PM