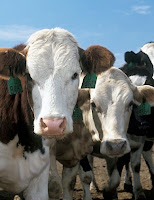 This summer's oppressive drought has crippled the Midwest. Crops have died in fields, stretches of the Mississippi River are at reached near record lows. It's all having an impact on the price of meat, dairy, corn and hay, and cattle producers have been struggling to feed and water their herds.  National Public Radio's Neal Conan spoke with some of them, and an agricultural economist.

Conan reports that many cattle farmers "have to decide how many animals to keep, how many to sell, how much food to preserve, what to do if conditions get worse and whether to stay in the business at all." Fifth-generation rancher Zack Jones of Haralson, Mont., told Conan that grass on his ranch is all turning gray or white, water is scarce and the air has become hazy with smoke from prairie or forest fires. He said he's practicing holistic management as a way to manage the land in a sustainable way. Through this method, cattle are allowed to graze on a patch of land, then moved to another before they eat the grass beyond the point of replenishment. Jones told Conan most ranchers don't practice holistic management, but it has worked for his family for generations.

Colorado State University professor Norman Dalsted told Conan drought has been a plague on the High Plains for at least two to three years, and this year's has intensified the consequences for ranchers. Most of those he knows are trying to "secure feed sources," he said, and some are even considering moving herds to winter in areas less affected by drought.

An Oklahoma rancher only identified as Tom told Conan that as the zwater levels drop, there's less water for cattle, and ranchers have invested their careers in building their herds. "It's something that can't be replaced overnight," he said, adding that most ranchers are aging and likely won't be willing to put 10 to 20 years into rebuilding a herd. (Read more)
Written by Ivy Brashear Posted at 8/23/2012 03:55:00 PM