While the overall population in California's Santa Cruz County has continued to increase, the rural population has decreased by about 20,000 people since 1990, due in large part to a 1978 state measure designed to prevent new developments in the county's mountainous regions, Jason Hoppin reports for the Santa Cruz Sentinel. Population numbers from 1978 were unavailable.

"The county's population has grown slowly but steadily over time," Hoppin writes. "But those overall numbers have masked a massive migration to the urban areas of the county's cherished coastline, a shift that comes with profound public policy implications for traffic, housing, public transportation and more. It could be the work of social forces — baby boomers wanting to be nearer services as they age, children growing up and moving away — but also appears to be the result of a foundational land-use policy put in place by county voters in 1978: Measure J." (The county's urban services boundary, put in place by 1978's Measure J, limits services to rural areas of the county and focuses development on the urban core) 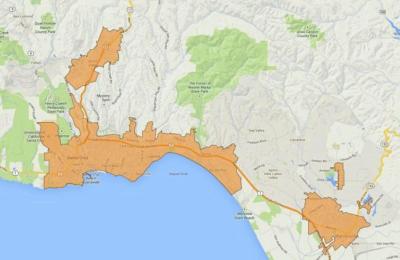 Measure J was a pro-environment ballot measure that "aimed to protect a region, the Santa Cruz Mountains, that had been teeming with people for more than a century," Hoppin writes. "The backbone of Measure J is the urban services line, a boundary that includes the incorporated cities of Scotts Valley, Santa Cruz, Capitola and Watsonville, and divides steep mountains from coastal prairies in unincorporated areas. On one side of the line would be one set of land-use policies; on the other, a second set."

The measure has led to expensive housing in urban areas and limited housing in rural ones, Hoppin writes. "Because Measure J's urban services boundary essentially bars sewer extensions into rural areas, multifamily housing is largely limited to the urban core." Urban areas haven't responded with enough housing, and the county has 3,500 homeless people, "one of the highest concentrations of homeless persons in the country."

"As part of Measure J, the county sets annual limits on new building permits," Hoppin writes. "A third of those go to the rural areas and the rest set aside for urban development. Last year, those numbers were modest by any measure: 84 and 168, respectively. But the availability of 252 new permits went barely noticed. The county issued 32 in all of 2013, and just 11 in rural areas."

"Further, the county is projected to fall short of state housing goals set by the California Department of Housing and Community Development," Hoppin writes. "Seven years in to a nine-year program, the county has built only 55 percent of its commitment, according to annual reports filed with the agency." (Read more)
Written by Tim Mandell Posted at 8/18/2014 12:00:00 PM