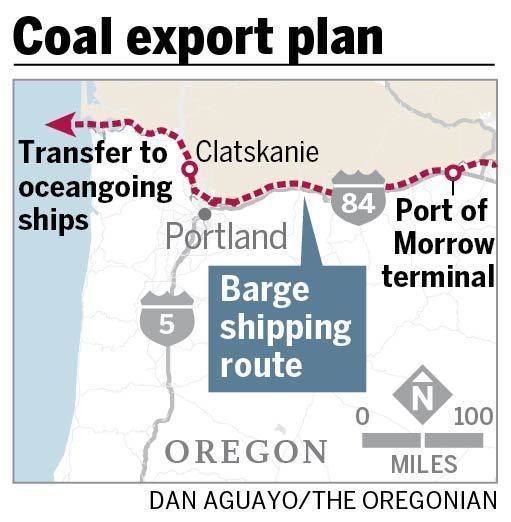 "Oregon's Department of State Lands on Monday dealt a serious blow to Ambre Energy's proposed coal terminal, denying a key permit needed for a project to export 8.8 million tons of coal annually to Asia," Rob Davis reports for The Oregonian. "The state agency said despite a two-year review, Australia-based Ambre Energy hadn't done enough to analyze alternatives that would avoid harming tribal fisheries at the Port of Morrow in Boardman, where the company had proposed to build a dock to load coal onto barges." (Oregonian graphic)

The $242 million project would have used railways to move coal from Wyoming and Montana to the Oregon terminal, where barges would take it to the coast to be shipped to Asia, Davis writes. "The terminal, one of three export facilities planned in the Pacific Northwest, is the smallest and furthest along. Industry analysts said it had the best chance of being built. Analysts said it could fill a niche for Asian countries like South Korea willing to pay more to diversify against interruptions from more volatile suppliers such as Indonesia."

But the project met strong resistance from opponents, including Democratic Gov. John Kitzhaber, as well as environmental groups and Native American tribes concerned about the project's affect on fisheries, Davis writes. Ambre "has 21 days to file for an appeal before an administrative law judge, whose decision can be reviewed in state appellate courts." (Read more)
Written by Tim Mandell Posted at 8/19/2014 12:15:00 PM