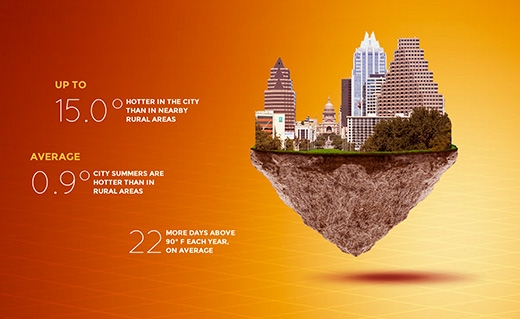 It's cooler to live in rural America. A study by Climate Central, which ranks extreme heat as the No. 1 killer in the U.S., said urban areas are warmer than adjacent rural ones, and the disparity between temperatures in the two regions continues to grow, Alan Neuhauser reports for U.S. News and World Report. (Climate Central graphic)

Co-author Alyson Kenward told reporters, “Every year, cities are seeing more extremely hot days than rural areas. The fact that they’re happening that much more frequently—10, 20, 30 days more—in the cities than in the rural areas, that really was surprising to me.” She said that "cities, in particular, feel the heat each summer. Home to about 80 percent of the country's population, they’re coated in asphalt and concrete, which retains more heat than dirt and grass; they have far greater concentrations of cars and industrial facilities, which emit more heat-trapping greenhouse gases; and they have fewer trees and vegetation, which help keep rural areas cool."

Using data going back to 1970 looking at the country's 60 largest metropolitan areas compared to surrounding rural areas, researchers found that 45 of the metro areas were hearing up faster than their rural counterparts, with daily temperatures averaging 17.5 degrees hotter in some cities, and in extreme cases, city temperatures were as much as 24 degrees hotter than in surrounding rural ones, Neuhauser writes. "Cities, on average, had eight more days that were hotter than 90 degrees compared to their rural counterparts. In 50 of 51 cities with reliable air-quality measurements, hotter temperatures correlated with measurably worse air quality." (Read more)
Written by Tim Mandell Posted at 8/21/2014 02:22:00 PM