While Congress has deferred the issue of Saturday mail delivery for another year, the U.S. Postal Service has cut costs in rural America by reducing the operating hours of more than 9,000 post offices, and thousands more will be cut back on Oct. 1. This is a nationwide story that can be localized in most counties. 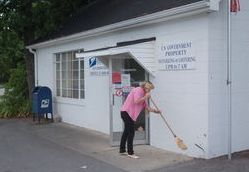 In the area around Danville, Ky., Todd Kleffman of The Advocate-Messenger found only one person "in a handful of interviews" who seemed concerned that rural post-office hours will be reduced. Brett Benton, who uses the Parksville office, told Kleffman, "I hate to see the little post offices go away, but it doesn’t really affect me much. If they’re not open, I just use the drop box outside, mostly to pay bills.” (Kleffman photo: Parksville's office will be open only four hours, not eight)

Another reason residents aren't concerned is that post-office boxes will remain available 24 hours a day. Local resident Jessica Johnson told Kleffman, "Besides, if you need a stamp or something, you can just go to Danville. It’s not like you’re 500 miles away from another post office.”

Kleffman writes, "That kind of no-big-deal reaction bears out the Postal Service’s decision to cut back the hours at a smaller, mostly rural facilities rather than close them down completely. ... Downsizing has occurred or is planned at some 33,000 post offices around the country, including 317 in Kentucky."

"Though postal patrons seem to be adjusting the new hours with little difficulty, many who were interviewed for this report expressed concern that the shortened hours are just the first death rattles that will ultimately lead to the demise of small, rural post offices," Kleffman writes. And while David Walton, spokesman for the USPS’s Kentuckiana office in Louisville and Tom Adkins, manager of operations for the Kentuckiana district, insisted that there are no plans to close any post offices, "folks suspect it won’t be too far into the future when they disappear." (Read more)
Written by Tim Mandell Posted at 8/19/2014 02:25:00 PM

Hi, just wondering what your thoughts are on the recent New York Times pieces on "The Hardest Places to Live in the US", in which Kentucky claims many of the top spots?