Rural areas are facing doctor shortages and hospital closures at a time when millions of previously uninsured Americans have gained coverage through federal health reform. With more people seeking care and fewer places to get it, there's a gap in rural areas for much-needed services. An unlikely source is making a bid to add rural health care to its resume. The biggest retailer in the U.S. has entered the medical field. Yes, Wal-Mart is bidding to be your primary health-care provider. 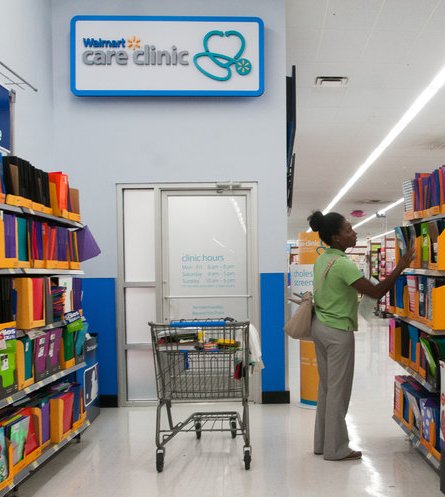 Wal-Mart "has opened six primary care locations in South Carolina and Texas and has plans to open another six by the end of the year," Laura Lorenzetti reports for Fortune. "Unlike existing urgent care centers at CVS or Walgreens stores, the Wal-Mart clinics are billing themselves as primary medical providers." (NYT photo by Rex Curry: Wal-Mart clinic in Carrollton, Tex.)

"Walmart’s clinics are partnering with QuadMed to staff their offices with nurse practitioners and physician assistants, who are fully qualified to diagnose illnesses and write prescriptions, but don’t have the full training of a medical doctor," Lorenzetti writes. "Each location will have a supervisory physician, although they will not actually treat patients." And costs will be cheap. "Patients are charged $40 a visit, while employees and dependents who are covered under Walmart’s insurance pay $4 a visit. The clinics accept Medicare and are starting to enroll some locations in Medicaid, but do not yet accept third-party insurance."

About 15 to 20 patients use the primary clinics in South Carolina and Texas every day, but a large percentage of them don't have another primary doctor, according to Dr. David Severance, the corporate medical director at QuadMed, Rachel Abrams reports for The New York Times. "For patients with complex issues, Dr. Severance said, the goal was for Walmart to be a patient’s first stop and part of a continuum of care."

"Walmart’s same-store sales, or sales at stores that have typically been open for more than 12 months, have been on the decline in recent months, and 10 percent of sales have evaporated at big retailers as more consumers shop online, according to Matt Nemer, a retail analyst with Wells Fargo," Abrams writes. But getting people in the store can help drive up sales, especially at the pharmacy, which does accept insurance. (Read more)
Written by Tim Mandell Posted at 8/19/2014 12:58:00 PM