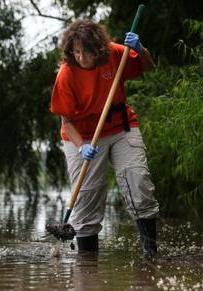 More than six months after a Duke Energy spill that leaked as much as 39,000 tons of coal ash into the Dan River, North Carolina legislators have reached a compromise on a coal-ash bill to have Duke drain its 33 state ash ponds within 15 years, Bruce Henderson reports for the Charlotte Observer. A vote could come as early as today. (AP photo by Erica Yoon: Madeline Schreiber, a Virginia Tech University associate professor of hydrogeology, pulls sediment samples from the Dan River in Danville, Va., in July for testing.)

Duke and state officials had argued about who was responsible for paying for the clean-up, but Duke reached a compromise with the Environmental Protection Agency in May and with the state in June.

"The legislation mandates that ash be excavated at only four of Duke’s 14 North Carolina coal-fired power plants," Henderson writes. "Low-risk ponds can be capped in place without removing ash. House and Senate members had split earlier over a House move to ensure that ponds could not be deemed low risk if they sat below the level of groundwater, which could become contaminated. The compromise bill doesn’t prohibit capping those ponds, according to a copy obtained by the Southern Environmental Law Center. Instead, it allows the N.C. Department of Environment and Natural Resources to permit capping if DENR is convinced ash elements won’t contaminate groundwater." (Read more)