Critical access hospitals are being left out of federal health reform shifts "aimed at bringing accountability to hospitals by linking Medicare payments to the quality of their care," Jordan Rau reports for Kaiser Health News. "The Department of Health and Human Services has not yet incorporated the 1,256 primarily rural, 'critical access' hospitals into Medicare’s pay-for-performance programs."

"Fewer than 1 in 20 critical access hospitals are participating in accountable care organizations, or ACOs, in which hospitals and doctors coordinate services with the promise of bonuses from Medicare if they deliver care more efficiently," Rau writes. "Another project, to test new ways to deliver rural health care, is limited to five states, and the selection of participants has not been announced even though the deadline for applications was in May." (Kaiser Health News map) 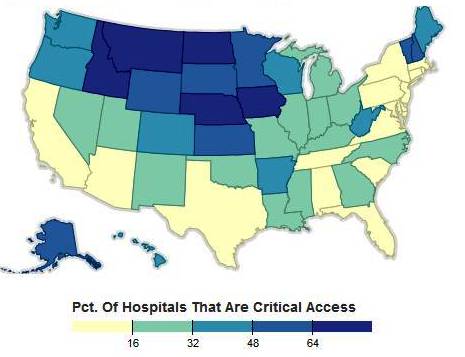 The Affordable Care Act "excused critical access hospitals from inclusion in the early years of Medicare’s pay-for-performance incentives," Rau writs. "They are exempt from fines levied against hospitals with a large number of patients who return within 30 days, as well as penalties or bonuses based on patient satisfaction reviews and hospital death rates."

"Congress gave these hospitals a reprieve because of the difficulty in bringing them into the pay-for-performance programs," Rau writes. "Many of the ways Medicare is measuring hospital quality require enough cases to be reliably analyzed, but these tiny hospitals often don’t have enough heart attack patients, for instance, to estimate death rates. Other measures look at surgical practices, but critical access hospitals often ship those patients to bigger institutions. Experts have come up with customized measures that could be used to judge rural hospital quality, such as the time it takes to evaluate a patient in the emergency room."

A total of 59 critical access hospitals are participating 18 of 338 ACOs, Rau writes. Lynn Barr, who runs the National Rural ACO consortium in Nevada City, Calif., told Rau, “The whole world is moving on, and rural is really being left behind.” (Read more)
Written by Tim Mandell Posted at 9/30/2014 04:28:00 PM