A watchdog report by the Environmental Protection Agency says the agency needs to take more action to protect water sources from unmonitored hazardous chemicals. The report, released on Monday by EPA’s Office of Inspector General, said "management controls put in place by the EPA to regulate and control hazardous chemical discharges from sewage treatment plants to water resources have limited effectiveness." 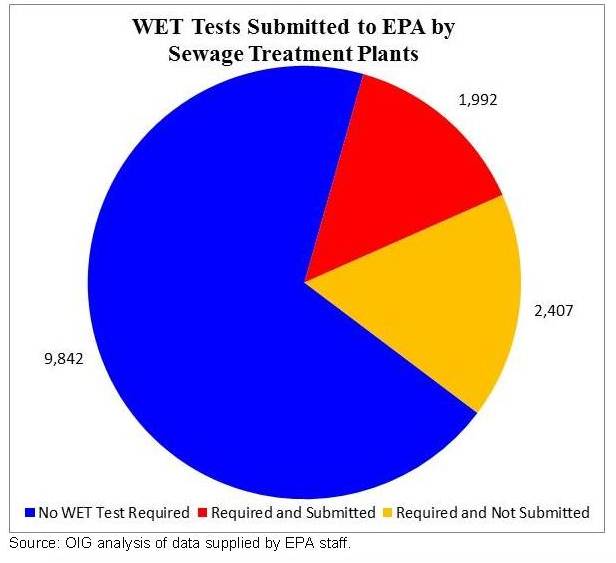 "The EPA regulates hazardous chemical discharges to and from sewage treatment plants, but these regulations are not effective in controlling the discharge of hundreds of hazardous chemicals to surface waters such as lakes and streams," the report said. The report also said sewage plant staff do not monitor for hazardous chemicals discharged by industrial users, mostly because the Clean Water Act hasn't been updated since 1981. (EPA graphic: Whole effluent toxicity tests)

"Auditors also found that the EPA may not be consistently enforcing the requirement that industrial polluters file reports on the chemicals they discharge to sewage plants," Cama writes. "The OIG found regional variations in the chemicals that industries had to report to the EPA or states and that programs to monitor chemical treatments and permitting sometimes do not coordinate."

"Auditors suggested that the EPA reevaluate which chemicals it regulates in sewage systems," Cama writes. "They also recommended that the agency improve communications internally and externally and boost its compliance monitoring, among other changes." (Read more)
Written by Tim Mandell Posted at 9/30/2014 04:27:00 PM