A pair of drug manufacturers are testing a vaccine that could help slow a deadly virus that is ravaging the pork industry. Harrisvaccines Inc. and Zoetis Inc. have received conditional regulatory approval "to market vaccines for porcine epidemic diarrhea virus, which has spread to 31 states and killed millions of young pigs since it was first identified in the U.S. in April 2013," Kelsey Gee reports The Wall Street Journal. "At least two other drug makers—Merck & Co. and Germany's Boehringer Ingelheim GmbH—say they are researching potential vaccines for PED." 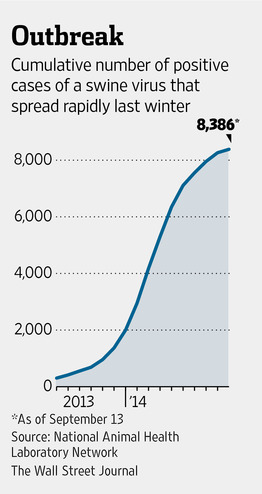 "The virus is fatal only to young pigs and poses no threat to human health or food safety, according to scientists," Gee writes. "PED has reduced U.S. hog supplies, raising costs for meat processors, retailers and consumers. Average retail pork prices jumped 12 percent in the 12 months through August to a record $4.20 a pound, according to federal data." (Journal graphic)

Major pig producers "are experimenting with the vaccines, though many in the industry say they don't expect them to become panaceas because previous vaccines for similar swine viruses have had limited success," Gee writes. "According to industry estimates, roughly eight million pigs have died from the virus since it was first discovered in the U.S., with some farms experiencing repeat outbreaks."

"U.S. pork production has fallen 1.8 percent this year, according to the USDA, lifting futures prices for slaughter-ready hogs to a record $1.33875 a pound in July," Gee writes. Prices have eased in the past two months, in part because fewer PED outbreaks occurred this summer compared with the start of the year. That is likely because warmer temperatures make it harder for the virus to survive, according to veterinarians." (Read more)
Written by Tim Mandell Posted at 10/03/2014 02:21:00 PM