Nearly half of non-metro residents did not get online in the past year, report says

Rural Americans are far less likely than their urban counterparts to get online, says a report by McKinsey & Company, a management consulting firm. Of the 50 million Americans who did not use the internet in the last year, 48 percent live in non-metro areas, Tim Marema reports for the Daily Yonder. Those numbers are startling, considering only about 15 percent of Americans reside in non-metro areas.

The report found that 80 percent of people who didn't go online are low-income, and more than half are 55 or older, Marema writes. Overall, 16 percent of the American population remains off-line. (McKinsey & Company graphic) 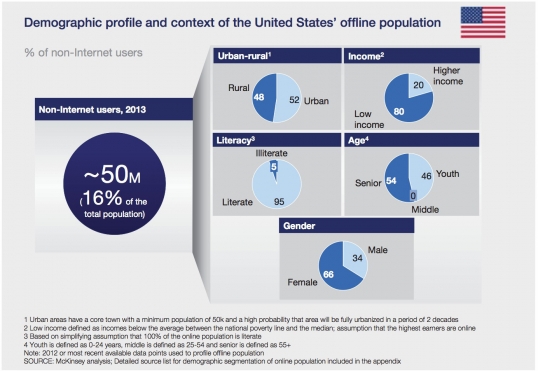 Other reports have had varied results, Marema writes. "A Pew Research Internet Project survey from September 2013 shows about 70 percent of Americans aged 18 and older had broadband at home, up from 66 percent the year before. The Federal Communications Commission’s national broadband map says more than 91 percent of U.S. communities have a broadband-speed connection. But a report from the World Economic Forum ranks the U.S. 34th globally in Internet bandwidth. And another report ranked the U.S. 17th in peak connection speeds during the first quarter of 2014, according the McKinsey and Company."

The Pew study says: "about a third of respondents said the Internet lacked 'relevance.' They were not interested, didn’t need it or think it’s a waste of time. Another third said they lacked the skills necessary to get online, found the process too difficult or were physically unable to manage the operation. Nineteen percent said the Internet was too expensive, and 7 percent said they did not have a connection." (Read more)
Written by Tim Mandell Posted at 10/03/2014 02:22:00 PM