Boston University journalism student Kyle Plantz had the opportunity to test Google Glass this past weekend at the Online News Association conference in Chicago. While the device offers some advantages, Plantz said many kinks still need to be worked out before it can become a useful journalism tool. Plantz used Google Glass while conducting an interview for USA Today from Skydeck Chicago, a glass-bottomed ledge 1,353 feet above the ground. 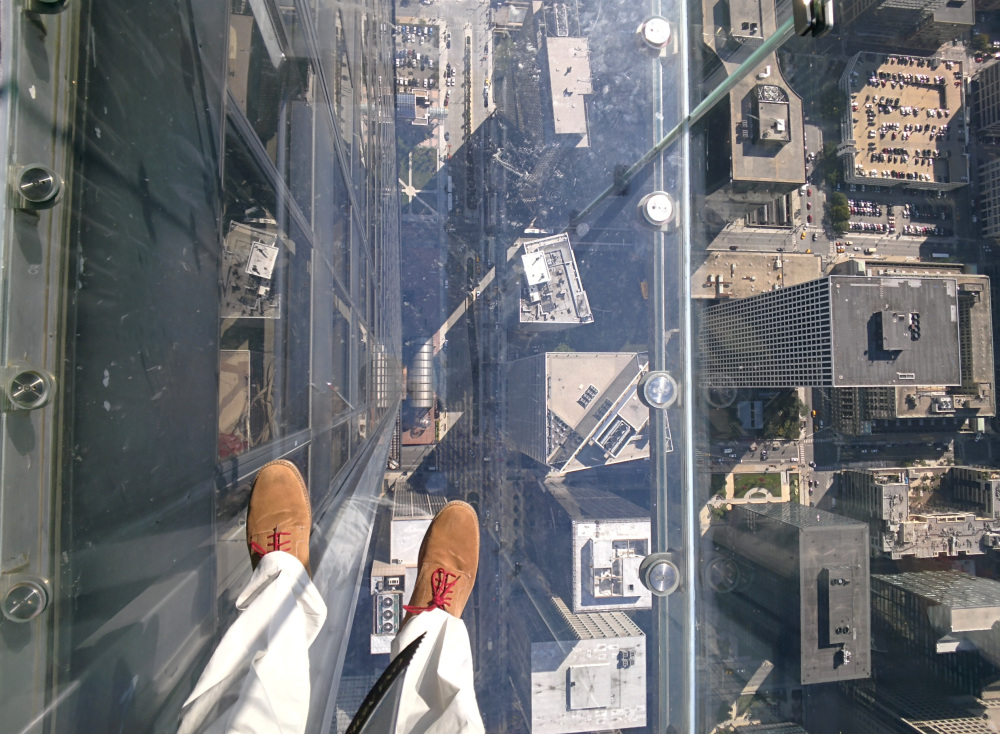 "For my interview with Skydeck General Manager Randy Stancik, we both stood out on the ledge," Plantz writes. "Using Google Glass is a little strange at first. The screen rested just above my right eye. I tried not to look too shifty with my eyes as I glanced up to make sure the video was running properly and looked back at Stancik. I looked up there a lot, which was a little more comfortable than looking down the whole time." (Plantz photo: Google Glass shot from Skydeck Chicago)

While Plantz said the ability to record the view hands-free was impressive, he said one of the problems he encountered was that the Glass overheated several times. "After recording a video or taking a picture, a message popped up telling me that the Glass needed to cool down for better use," he writes. "Perhaps because I was standing in a (excuse my pun) glass encasement with the sun beating down on me, I guess the Glass could overheat a little, but that’s something Google should keep in mind before they release the final product."

"Another problem I had was battery life," he said. Plantz said he could record for an hour straight before the battery would die. "While that was fine for our brief use at the conference, if a journalist is out reporting in the field like in Syria or even at a protest in the United States, Glass should have a longer life span to allow for optimal reporting."

"Hopefully over time, Google can improve upon their Glass beta-testing to make it better for everyday use but also for journalists who want to use it to enhance their reporting," Plantz writes. "For me, it was an once-in-a-lifetime chance to try out a really awesome product. Would I ever use one in my daily life? Probably not. In reporting? Only if the product became cheaper. I do believe journalism is headed in this direction, so I found it a unique opportunity to be one of the testers of the future of journalism." (Read more)
Written by Tim Mandell Posted at 10/01/2014 03:57:00 PM