The honeybee population has decreased about 30 percent during each of the last eight winters. The decline has been blamed on anything from pesticides to viruses, but the truth is that many scientists do not know why many bees keep dying and what can be done about it. The Retro Report, an offshoot of the The New York Times that produces video documentaries examining major news stories from the past and analyzing what has happened since, has decided to focus on the plight of bees. 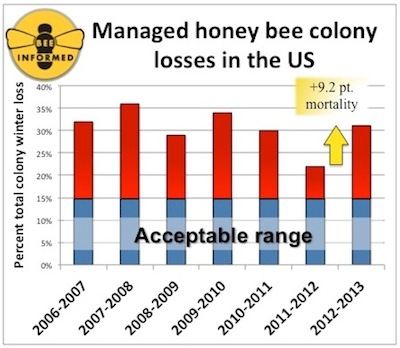 "The centrality of bees to our collective well-being is hard to overstate," writes Clyde Haberman for the Retro Report. "They pollinate dozens of crops: apples, blueberries, avocados, soybeans, strawberries, you name it. The U.S. Department of Agriculture estimates that nearly one-third of everything that Americans eat depends on bee pollination. Billions of dollars are at stake each year for farmers, ranchers and, of course, beekeepers."

"But in the fall and winter of 2006-07, something strange happened," Haberman writes. "As Dave Hackenberg, a beekeeper in central Pennsylvania and in Florida, recalled for Retro Report, he went to his 400 hives one morning and found most of them empty. Queen bees remained, but worker bees had vanished."

Overall, the U.S. has seen honeybee colonies go from three million two decades ago to 2.4 million today, Haberman writes. "The fear is that this dying-off is too great for the country’s ever-expanding agricultural needs." (Read more)
Written by Tim Mandell Posted at 9/29/2014 01:15:00 PM