The Great Lakes Commission is seeking a 40 percent reduction of the annual amount of phosphorus flowing into Lake Erie, "the source of toxic algae outbreaks and the reason the city of Toledo lost its drinking water for two days this past summer," Dan Egan reports for the Milwaukee Journal Sentinel. "That is the amount already targeted by the International Joint Commission, which oversees U.S. and Canadian boundary waters issues." 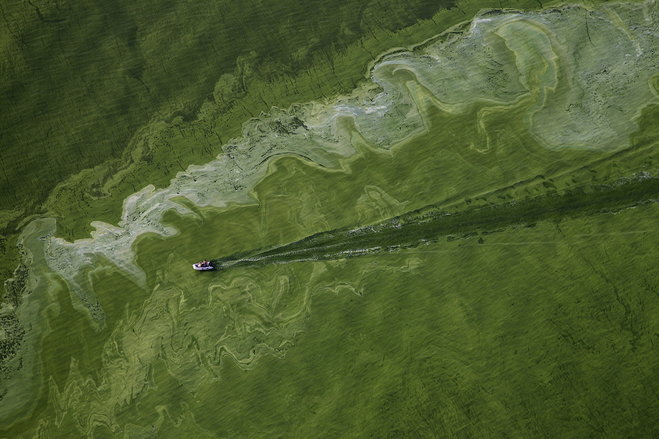 "Phosphorus is flowing into Lake Erie from city sewage plants, industries and suburban lawns and streets, but the largest single source is by far runoff from farm fields," Egan writes. (Journal Sentinel photo by Peter Essick: Boats going through an algae bloom on Lake Erie near Toledo, Ohio)

Ohio officials responded to the Toledo crisis with a measure that requires farmers to get fertilizer licenses, in an attempt to control farm run-off in water supplies. But some fear the law has a loophole that benefits large manure users. Toxic algae advisories are fairly common in the summer, with many states issuing them.

The Environmental Protection Agency said on Monday that by March 2015 it will issue drinking water health advisories for cyanobacteria, the harmful forms of blue-green algae that contaminated water supplies in Toledo," Amena Saiyid reports for Bloomberg. "The agency is working on health advisories for microcystin L-R and cylindrospermopsin, with plans to have them out before the season of the harmful algal blooms begins next year." (Read more)
Written by Tim Mandell Posted at 10/02/2014 03:52:00 PM