Newspapers are still the main source of information for rural Americans, survey says 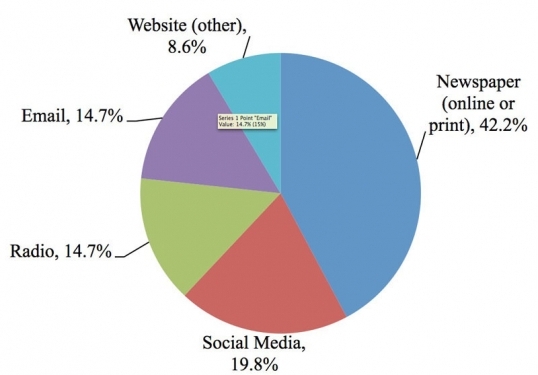 When asked how they prefer to be informed of community events, 47.7 percent of people who responded through paper survey said newspapers, while 40.9 percent who responded electronically said newspapers, the Yonder writes. Social media was the second most popular answer, followed by email. Of the 12 communities surveyed, eight offer the local paper online. (Yonder graphic: Where respondents said they get information)

"Another study completed by the University of Missouri noted that in areas where the circulation size of the local newspaper was 15,000 or less that over two-thirds of residents read their local newspaper," writes the Yonder. "Forty-two percent of respondents from these small communities said their primary source of information was the 'newspaper' and 'newspaper’s website.'" (Read more)
Written by Tim Mandell Posted at 9/30/2014 04:28:00 PM