Drones are being used in many new ways, including wildlife research and preservation 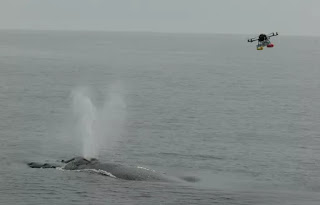 A Samford University biology professor used drones to discover two species of endangered fish in Alabama’s waterways, "in part because the unmanned aircraft can reach areas not easily accessible by boat and can survey the water from a closer distance than a helicopter," Overly writes. Also, the Woods Hole Oceanographic Institution, a private research facility in Massachusetts, "has used the flying devices to collect photographs and breath samples from humpback whales for scientific research. A drone affixed with petri dishes hovers over the animal’s blowhole as it exhales, then returns to a ship where the sample is immediately frozen, said assistant scientist Amy Apprill. Scientists then study the microbes in each breath sample, and compare them across different species and environments."

A Cleveland-based business is using drones "to show people with terminal illness and living in hospice their beloved locations, such as a childhood hometown or favorite vacation spot, one final time," Overly writes. Drones are being used to enhance athletics, such as one "that monitors the path of blind runners using a pair of cameras and emits sound to guide those runners as they make their way around a track." In Japan, officials are using drones to use nets to catch rogue drones. (Read more)
Written by Tim Mandell Posted at 7/11/2016 09:57:00 AM