Population health is usually measured by lines of government jurisdiction, such as states and counties. But regional health systems often don't follow those lines, and are built around major hospitals that perform complex surgeries. The hospital referral networks create regional health-care markets, and the U.S. has 306 of them, as defined by the Dartmouth Atlas of Health Care. Here's a screenshot from it: 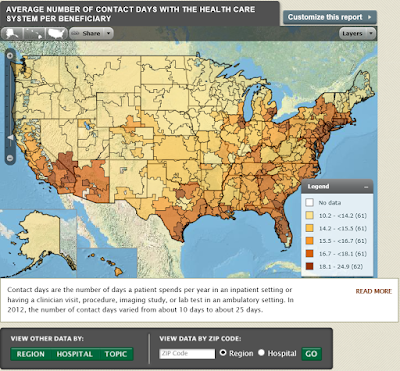 The Commonwealth Fund, a foundation that aims to create a high-performing health system, uses the regional markets to measure the health of their population and the efficacy of their health systems. Today it issued its second Scorecard on Local Health System Performance, based on 2013 and 2014 data and comparing it to the 2011 data used on the first scorecard. The 2014 data reflect the impact of federal health reform, especially the state-by-state expansion of eligibility for the Medicaid program.

"The scorecard shows that many U.S. communities experienced improvements: fewer uninsured residents, better quality of care in doctors’ offices and hospitals, more efficient use of hospitals, and fewer deaths from treatable cancers, among other gains," The Commonwealth Fund says. "Still, the persistence of widespread differences between areas is a reminder that many local health systems have yet to reach the potential attained elsewhere in the country."

The scorecard data are presented in interactive fashion, showing changes in the four major dimensions (access, prevention and treatment, healthy lives and avoidable trips to the hospital, including hospital costs) and the 35 individual elements that make up those dimensions. Here's an example: 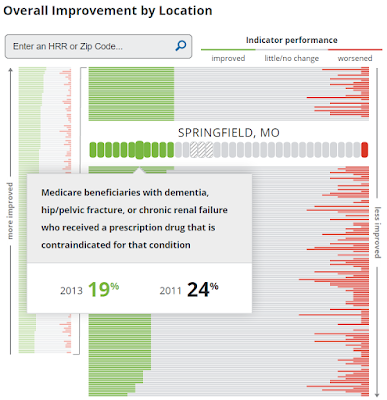 The hospital regions are based on ZIP codes but in most cases roughly follow county lines. The Dartmouth Atlas allows you to look up data by ZIP code. For examples of stories about the five regions based in one state, see Kentucky Health News.
Written by Al Cross Posted at 7/14/2016 12:01:00 AM