The controversial Brexit vote in Great Britain is a mirror of the 2016 presidential election, Bill Bishop reports for the Daily Yonder. Cities in Britain voted to stay in the European Union, while rural areas voted to leave.

"Like the U.S., Great Britain is a country that is divided politically—and geographically," he writes. "The Brexit election was close nationally, within 1.4 percentage points. But in the communities where most British citizens live, the election wasn’t close at all. More than 41 percent of all voters lived in a council area where the Brexit vote was decided by margins of 20 percentage points or more. (There are 433 council areas in Great Britain.) Nearly seven out of 10 voters lived in a council where the margin was greater than 10 percentage points."

"The most pro-EU parts of Britain were in the City of London," Bishop writes. "The most pro-Brexit councils were in the East Midlands and East of England. We’ve seen a similar geographic divide for some time in this country. In the 2014 Congressional elections, Democrats had majorities only in counties that were part of the nation’s largest cities, metro areas with a million or more people. Outside those places, Republicans won by landslide margins." (Yonder map: An example of the growing rural-urban divide) 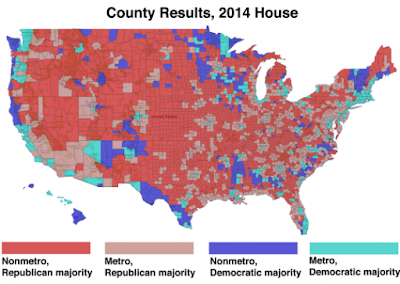 "By the 2012 presidential election, more than half of all voters lived in a county where the contest between Mitt Romney and Barack Obama was decided by a landslide of 20 percentage points or more," Bishop writes. "The proportion of Americans living in these landslide counties has been growing steadily since 1976."

The main reason, Bishop and retired statistician Robert Cushing said in their book The Big Sort, is that Americans want to live near like-minded individuals, Bishop writes. "Politically, this would mean that people would vote the same way during national elections. Practically, it would mean people were living in separate countries. People would see their own views reinforced by their neighbors. And they would not understand those who disagreed with them politically because they never knew the other existed." (Read more)
Written by Tim Mandell Posted at 7/14/2016 12:38:00 PM