Putting small children to bed earlier reduces obesity among them as teenagers, says a study by The Ohio State University College of Public Health, published in The Journal of Pediatrics. The study looked at 977 participants of preschool age (an average of 4.7 years old) at 10 U.S. sites in 1995-96, then again when the children were 15. The study participants were all born in 1991. Child obesity is more common in rural areas.

Of the study group 25 percent went to bed at 8 p.m. or earlier, 50 percent from after 8 p.m. but before 9 p.m. and 25 percent after 9 p.m. The obesity rate by age 15 of the children put to bed earliest was 10 percent. It was 16 percent among those put to bed after 8 p.m. but before 9 p.m. and 23 percent among those that went to bed after 9 p.m. The study states, "Preschool-aged children with early weekday bedtimes were one-half as likely as children with late bedtimes to be obese as adolescents. Bedtimes are a modifiable routine that may help to prevent obesity." 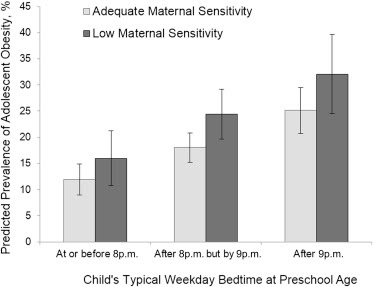 The research is "the first to utilize data collected over a 10-year period," Kaitlin Fochesato reports for The Columbus Dispatch. "The research was based on data from something called the Study of Early Child Care and Youth Development, which was started 25 years ago and funded by the National Institutes of Health," said lead researcher Sarah Friedman, who said the idea was conceived during a meeting of researchers from the National Academy of Sciences.
Written by Tim Mandell Posted at 7/14/2016 12:36:00 PM