A young newspaper publisher in Kansas who now owns five publications has focused his attention on local news and print journalism, instead of digital news that strays from connecting with the hometown readers. Joey Young, owner of Kansas Publishing Ventures, owns three weekly newspapers, The Clarion, Newton Now and Hillsboro Free Press, a monthly shopper and a quarterly glossy magazine, Young writes on his blog, Newspaper Disruptor. He bought his first newspaper in 2012 at the age of 27, saying at the time that he was the youngest newspaper owner in the state.

"I often tell people to quit drinking the Kool-Aid and start reading things that challenge your way of thinking and how you run your news operation to see if you can grow from it," Young writes. "It hurts me that so many of my brothers and sisters have forgotten the gal who brought them to the party and ignore their print products." 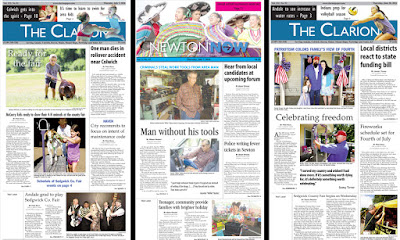 "Clearly there is room for growth digitally, but until there is a business model that doesn’t bankrupt distributing journalism, I think I will keep improving my print product and just playing in the online world for now," Young writes. "Daily papers and folks like Jeff Bezos might have the funds to experiment and throw content online for free with no real monetary business model, but for community newspapers like the ones I own, I think we should let the big guys figure it out before we jump head first in a digital frenzy."

Young has never taken a journalism class, but served as sportswriter for the Hutchinson Community College newspaper, after his wife, the editor, was in need of someone to fill that role, Lindsey Bauman reported in September for The Hutchinson News. After graduation he got a job at the Harvey County Independent, then was managing editor of The Clarion, before working at his hometown paper, The Hutchinson News. Two years later when the The Clarion—his wife’s hometown paper—was for sale he bought it.
Written by Tim Mandell Posted at 7/13/2016 11:36:00 AM