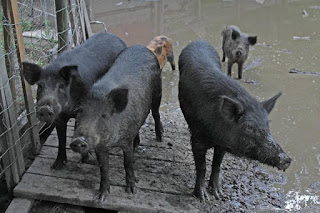 North Carolina's state and federal wildlife control officers can now shoot feral hogs from aircrafts, Dan Boylan reports for The Charlotte Observer. Lawmakers on July 1 passed the 2016 North Carolina Farm Act, which leaves Virginia as the only state in the continental U.S. that doesn't allow the federal government to use aerial culling. Ashton Godwin, the Wildlife Resources Commission's legislative liaison, told Boylan, "It's culling for wildlife management—not sport. We have no intention to open this to the public." (Observer photo by Abbie Bennett shows captured wild hogs.)

Wild hogs, which weigh 150 to 250 pounds and congregate in groups, cause up to $1.5 billion in damages annually in the U.S., Boylan writes. "Disease is also an issue. Three years ago, North Carolina was ground zero for PEDv—the highly contagious porcine diarrhea virus. Since April 2013, PEDv has killed an estimated 10 percent of America's hog population. North Carolina's $11 billion-a-year pork industry, which employs more than 46,000 people, has felt the threat."
Written by Tim Mandell Posted at 7/14/2016 12:16:00 PM