A well-told tale of repentance, reinvention and redemption in the rural South, now cut short

Is 37 years of redemption through good deeds and community service enough to repay 10 years of a prison sentence that was never completed? The story of Bill Burchfield, a.k.a. Harold "Bill" Arnold, is one that questions the purpose of prison and whether or not living a good life is repayment enough, writes Andrew Miller, the southern U.S. correspondent for The Economist: "Lots of prisoners wind up inside for one-off misjudgments; many leave behind dependents and disregarded good deeds, just as Bill may do now. His case is extraordinary, but the quirks in the penitential system it highlights are routine."

Burchfield, 67, who was captured in June in rural London, Ky., was originally sentenced to 15 years in prison in 1973 after he pled guilty in Dalton, Ga., to involuntary manslaughter in the shooting death of his wife, Miller writes. Burchfield said it was an accident, but pled guilty without a trial because he was "young and scared." He escaped from prison, first in 1975, then again in 1979.

Since then he has spent most of his life in rural areas, ending up in London about nine years ago, Miller writes. "Like thousands of Americans who start again in new places, albeit with a twist, he built a different life. He had assumed the identity of a cousin from Georgia, Harold Arnold, who died as a teenager, though informally he retained his first name: a tell-tale clue within his alias that apparently no one clocked. ... He applied for a Social Security number in his cousin’s name and got one; nobody ever objected that the real Harold Arnold was dead. He was careful 'to stay inside the law'. Otherwise, fugitive though he was, he lived 'like a normal human being. I wasn’t out there trying to duck and dive and hide.'” 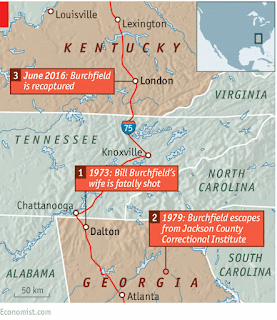 It isn't hard to find people among London's 8,000 residents who have glowing praise for Burchfield, Miller reports. They call him “A very giving, caring person,” “Just a good man,” and he was "The most kind, the most wonderful man you could ever meet. He helped so many people in the community.” One resident said Burchfield gave him a trailer that was being used as a cigarette kiosk. Burchfield was known for giving meals to people in need. He was baptized and became the deacon of a church. Burchfield told Miller, "Everybody can change. Everybody has the ability to turn their life around and do something good with it." His lawyer, Jason Kincer, told Miller, “Shouldn’t [his] debt be mitigated by the life that he has lived?”

Apparently not everyone is a fan, Miller writes: "Someone had enough of a grudge against him to tip off the authorities in Georgia. As a result he may have to serve the 10 remaining years of his old sentences, plus any additional punishment for the escape. Contemplating that prospect, he says he considers God’s forgiveness more important than Georgia’s, but hopes that earthly powers may show mercy too." Burchfield told Miller, “My health is gone. I won’t be around many more years, at the best.” He said his hope is that Georgia will say, “We don’t want him.”

That's a sentiment shared by his friends and neighbors, who started a petition "calling him 'a true and faithful friend of all citizens of Laurel County' and requesting his release has garnered hundreds of signatures." His pastor, Charles Shelton, told Miller, “It’s a different person they’re incarcerating." Tim Johnson, the beneficiary of the trailer, told Miller, “If he is the person they say he is, he is reformed. He’s still Bill Arnold to me.” (Read more)
Written by Tim Mandell Posted at 7/12/2016 12:31:00 PM