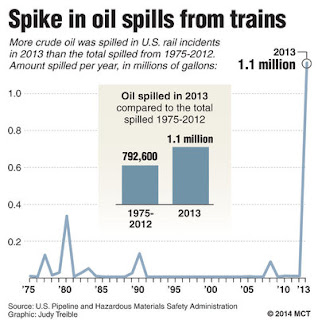 The U.S. Department of Transportation "on Wednesday released proposed new spill-response rules for rail carriers carrying crude oil," reports McClatchy Newspapers. "Rail carriers transporting crude oil would be required to plan for the maximum amount of spillage in a derailment and would be required to provide monthly notification to state and tribal emergency responders of the number of rail cars loaded with crude oil expected to pass through an area on a weekly basis. The information would include the routes the trains are expected to travel and a description of what hazardous materials they will be carrying." (McClatchy map)

Crude-oil spills have been on the rise in recent years, with more oil spilled on U.S. railways in 2013 than in the previous 37 years combined. The 2013 derailment in Quebec that resulted in 47 deaths was on route from North Dakota to Maine.

The National Transportation Safety Board warned that "accident-prone tank cars used to haul crude oil and ethanol by rail could remain in service for another 15 years under federal rules that allow companies to phase in upgrades to the aging fleet," Matthew Brown reports for The Associated Press. NTSB Chairman Christopher Hart said in a statement that "without mandatory, periodic benchmarks for meeting the requirements, the decision to upgrade to safer tank car designs 'is left entirely to tank car fleet owners, and may be driven by market factor influences, not safety improvements.'"

Tom Simpson of the Railway Supply Institute, which represents tank-car manufacturers and owners, "said the industry is committed to putting stronger cars in place," Brown writes. "Members of the group will meet deadlines for replacing or upgrading the cars, he said, noting that demand for rail cars has eased after crude-by-rail shipments decreased over the past two years in response to lower oil prices."
Written by Tim Mandell Posted at 7/14/2016 12:39:00 PM