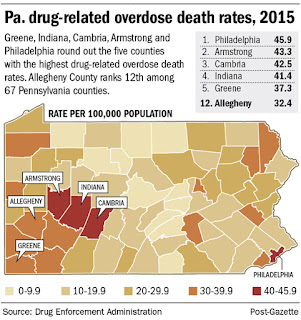 Indiana County had the largest percent increase, from 10 fatal overdoses in 2014 to 36 last year, with half of the overdose deaths involving heroin and one-third oxycodone, Rich Lord reports for the Pittsburgh Post-Gazettte. Overall, eight of the top 12 counties with the highest drug overdose rates were in the southwest and heroin, fentanyl, prescription opioids or combinations of the three were found in 81 percent of all overdose victims. Some counties, such as Armstrong, are on pace for higher numbers this year.

"The Pittsburgh Post-Gazette in May reported that lax discipline of physicians in Pennsylvania correlates with persistent opioid prescribing," Lord writes. "Crackdowns on doctors in other states have driven declines in opioid prescribing, and in the case of Kentucky halted the increase in overdoses." However, many painkiller addicts in Kentucky have switched to cheap heroin, often laced with the highly potent fentanyl. (Read more)
Written by Tim Mandell Posted at 7/13/2016 10:43:00 AM