Vermont now requires some free preschool for all children; 70% of parents of children under 6 work 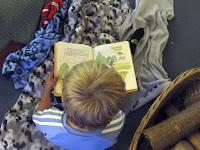 A new law in Vermont, where more than 50 percent of the population is rural, requires "communities to offer at least 10 hours a week of free, high quality preschool for 35 weeks per year to children in that age group," Lisa Rathke reports for The Associated Press. The law, the first of its kind in the U.S., would "provide publicly funded pre-kindergarten programs to all 3- and 4-year-olds as of this month, state officials say. Previously, some districts offered publicly funded preschool voluntarily." (Rathke photo: A preschool student reading in Hinesburg, Vt.)

More than 70 percent of Vermont children under age 6 have working parents, so universal pre-K is critical to supporting working families, said Gov. Peter Shumlin's administration, Rathke writes. Shumlin, a Democrat, "signed the law in 2014 and it went into effect July 1, but some communities implemented programs early. The programs include those operated by community programs, public schools, private early education and care programs and Head Start. To qualify, programs must be licensed or registered by the Department for Children and Families and the curricula must be aligned with the state's early learning standards."

"The average weekly cost of childcare for pre-school aged children in a licensed center in Vermont in 2014 was $192, according to a survey by the Vermont Department for Children and Families," Rathke writes. The law will reduce those costs, said officials at one preschool. (Read more)
Written by Tim Mandell Posted at 7/13/2016 11:37:00 AM