Voters in in Appalachian coal states favor transitioning away from coal, and a bill in Congress to help fund the effort, says a poll conducted by the Sierra Club and the West Virginia Center on Budget and Policy. The poll in Kentucky, Ohio, Pennsylvania, Tennessee, Virginia and West Virginia surveyed 150 registered voters in each state. It was conducted by Public Opinion Strategies, a Republican firm.

Brian Willis, of the Sierra Club, told The Rural Blog in an email: "We did not capture demographic information about whether or not a respondent lives near a coalfield. We did ask whether or not the respondent or someone in their household has ever been employed in coal mining or a company that provides products or services to a coal company. Eleven percent of the total sample said 'yes', and support for RECLAIM is high among this group (87 percent)."

Asked about policymaking choices by elected officials and decision-makers, 62 percent said they should concentrate on helping "attract new employers, diversify the economy, and ensure workers get new jobs in growing industries," and 32 percent said they should prioritize "fighting government regulations that have made it harder to produce coal, to ensure the good‐paying jobs in mining come back."

The highest number was in Virginia, where 72 percent said the state should move away from coal. But only a small part of Virginia has coal. West Virginia, most of which has coal, had the lowest number (54 percent). In the two-coalfield state of Kentucky, it was 59 percent. The poll did not separate results for those who live in a coalfield and those who do not. 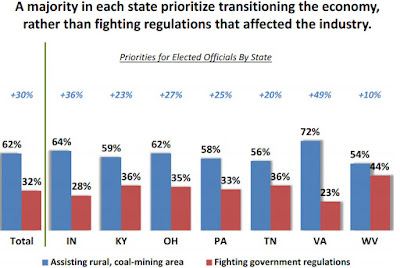 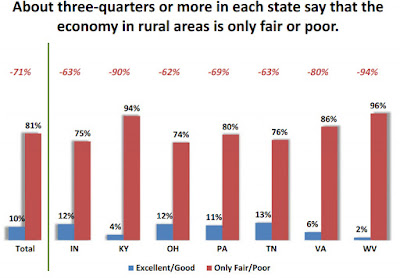 The bill in Congress, titled the RECLAIM Act, would take $1 billion in previously collected taxes on coal from the Abandoned Mine Reclamation Fund to help revitalize coal communities hit hardest by the downturn in the coal industry. It drew overwhelming support, with at least 87 percent of respondents in every state supporting it and no real difference by party. 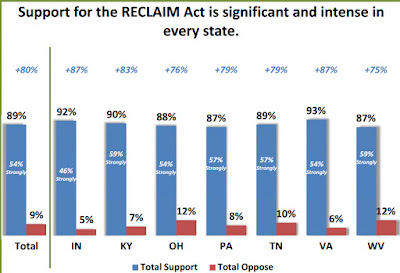