Local governments are trying to find ways around state laws prohibiting them form extending broadband to rural areas, Jen Fifield reports for Stateline. Chattanooga, Tennessee, for example, is known as "Gig City" for its mega-gigabit speeds, but neighboring rural areas are stuck in the technology Stone Age for uploads and downloads. Chattanooga wants to expand its service to rural areas, "but a state law bans cities from doing so, and the U.S. Court of Appeals for the Sixth Circuit last month rejected an attempt by the Federal Communications Commission to block the state law."

"The court’s decision was limited to Chattanooga and Wilson, N.C., another city that wants to expand its service," Fifield writes. "But about 20 states have laws that ban or restrict municipal broadband, and the ruling means that any city that attempts to get around the laws won’t be able to turn to the federal agency for help. The outcome sends the fight back to the local level, where cities are looking for ways to work within the laws so they can reach residents on the other side of the digital divide." 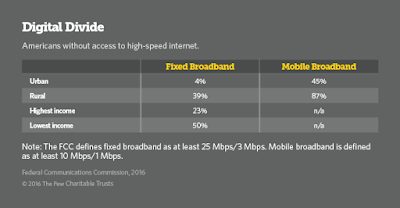 "Advocates for restrictions on municipal broadband, including Republican state lawmakers and free-market think tanks, say the rules are needed to keep the government from unfairly competing with businesses, which are subject to state and local regulations and taxes that many cities don’t face," Fifield writes. Providers often want to avoid rural areas because they say demand is low and costs are high to build new networks.

Christopher Mitchell, policy director at Next Century Cities, a nonprofit that advocates for more high-speed internet, said there are ways around the laws, Fifield writes. One way is through cooperatives, where customers own the network. "A city could build the fiber optic network and agree to lease it to the co-op at a low rate. Or, it could take out a bond and make a loan to the co-op to build the system."
Written by Tim Mandell Posted at 9/28/2016 12:49:00 PM