Rural areas continue to struggle to reach pre-Great Recession employment numbers, Bill Bishop and Tim Marema report for the Daily Yonder. Among 1,969 non-metro counties, 1,326—67.3 percent—had fewer jobs last year than before the recession started in 2008. Only 49.8 percent of urban counties, 580 of 1,165, had fewer jobs in 2015 than in 2008. Most of the job growth occurred in areas with one million or more residents.

The Yonder sorted counties using the rural-urban continuum code, used by the Economic Research Service of the U.S. Department of Agriculture to divide counties into nine categories, with 1 being the largest (one million residents or more) and 9 being the smallest (not more than 2,500 residents living in a city), Bishop and Marema write. When using this system "the top two largest categories gained gained 4.5 million jobs since 2008," while "every other county category had fewer jobs in 2015 than in 2008." (Yonder chart: Job status based on the rural-urban continuum code; click on it for a larger version) 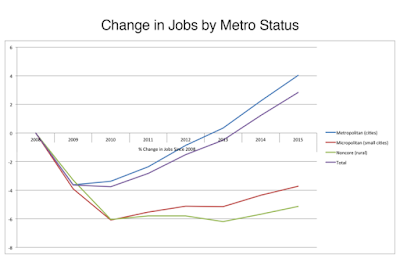