"Waves of immigrants coming into the U.S. in recent decades have helped the economy over the long haul and had little lasting impact on the wages or employment levels of native-born Americans, according to one of the most comprehensive studies yet on the topic," Jeffrey Sparshott reports for The Wall Street Journal.

The study by The National Academies of Sciences, Engineering and Medicine, looked at immigrant trends over the past 20 years and found that immigrants have a very small effect on wages of American-born workers, with most of that coming among low-skilled workers who are most likely high-school dropouts.

The study found that "immigration also can lead to more innovation, entrepreneurship and technological change across the economy," Researchers found that “the prospects for long-run economic growth in the U.S. would be considerably dimmed without the contributions of high-skilled immigrants" and "that 'over a long time horizon (about 75 years)' the fiscal impacts of immigrants 'are generally positive at the federal level and negative at the state and local levels.'” (WSJ graphic: Jobs held by immigrants) 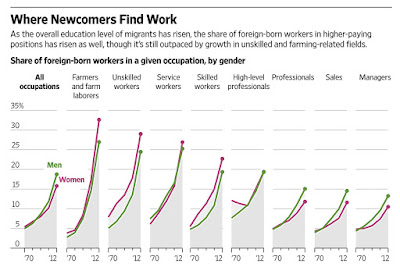 In 2014 there was an estimated 42.3 million immigrants in the U.S., mostly working as unskilled labor, in the service industry or agriculture, Sparshott writes. In 2012 more than half of all immigrants—53 percent—had some college and 16 percent were college graduates. (WSJ graphic: Education level of immigrants) 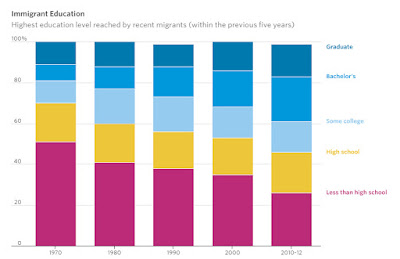 The study did find that "immigration can burden government finances, especially education budgets at the state and local levels," Sparshott writes. The report, citing a lack of data, doesn’t distinguish between the impacts of documented and undocumented immigrants.
Written by Tim Mandell Posted at 9/26/2016 01:57:00 PM