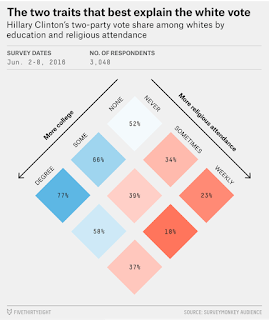 Religion and education are the demographics most likely to determine how white people will vote in the presidential election, Milo Beckman reports for FiveThirtyEight. A survey by FiveThirtyEight and SurveyMonkey shows that white voters are more likely to lean to the left if they are "more college than church" and will lean right if they are "more church than college." What it boils down to, when looking at equal influence from church and college, is that "urban voters lean left while suburban and rural voters lean right." (FiveThirty Eight graphic)

"College whites and church whites are taught different moral values in their respective houses of learning, values which trickle up into policy preferences," Beckman writes. "Members of white Christian congregations are more likely than any other racial-religious group to rank personal responsibility above structural factors, such as unequal access to education, in explaining racial disparities in income. And while secular universities rarely purport to give moral teachings to their students, research has found that college education increases tolerance."


"Republican ideology seems to be aligned with the values taught in historically white churches," he writes. "For instance, black and Hispanic members of interracial congregations hold the same individualistic social attitudes as white churchgoers, suggesting that they may adopt these conservative views after extended exposure to white church values." (FiveThirty Eight graphic: How people are more likely to vote)

Another possibility is that more educated people are more likely to agree with scientific explanations, meaning they believe in climate change as opposed to a less educated person who denies the existence of climate change, Beckman writes. Also, people tend to associate with like-minded individuals, where they reinforce each other's beliefs.
Written by Tim Mandell Posted at 9/26/2016 01:51:00 PM