Ballot-measure campaigns raise a lot; have no limits, little regulation on contributions

About $379 million has been raised for and against 165 state ballot measures—74 are the result of citizen petitions— in 35 states, Elaine Povich reports for Stateline. Nearly half of all funds—$155 million—has gone to healthcare issues. Coming in a distant second is energy ($19.7 million), followed by marijuana ($19.2 million), firearms ($12.4 million), law enforcement ($6.8 million) and minimum wage ($3.2 million).

The state ballot campaigns are attracting widespread interest from corporations, unions, wealthy individuals and special interest groups, "as referendums increasingly replace legislatures as a battleground for people who want to make state policy, on issues ranging from legalizing marijuana and raising the minimum wage to gun control and drug pricing, and from tobacco taxes to solar energy and education," Povich writes. The main reason is that  "there’s no limit and little regulation on contributions to referendum campaigns." (Stateline chart) 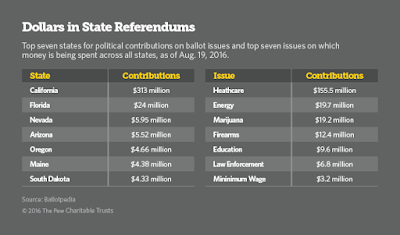 California has attracted the majority of money, $313 million, with more than $96 million for "a drug pricing initiative, which would require that state agencies pay no more than the U.S. Department of Veterans Affairs for prescription drugs," Povich writes. Most of the money, $86 million, has come from the opposition, mostly from drug makers.

While minimum wage ranks seventh in money raised, it's an issue on ballots in five states—Arizona, Colorado, Maine, South Dakota and Washington, Povich writes. The measure on every state except South Dakota would increase the minimum wage. (Read more)
Written by Tim Mandell Posted at 9/27/2016 09:34:00 AM