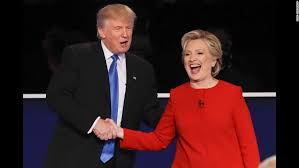 The first presidential debate between Republican Donald Trump and Democrat Hillary Clinton contained plenty of factual errors. We only have room here for a few. If you want to re-publish them, we encourage you to look at reports by The Washington Post's Fact Checker unit, PolitiFact and FactCheck.org for full context and things you may want to add.

Trump said, “So Ford is leaving. You see that, their small car division leaving. Thousands of jobs leaving Michigan, leaving Ohio. They’re all leaving. And we can’t allow it to happen anymore.” Post fact-checkers Glenn Kessler and Michelle Ye Hee Le write, "Ford is moving its small-car production to Mexico, but the expansion will not affect U.S. workers. The company has said that while production of Ford Focus models will shift to Mexico, its plant in Michigan will build other, larger vehicles. Ford and many other automakers are finding Mexico more attractive for several reasons."

Clinton said that under Trump's tax plan "we would lose 3.5 million jobs and maybe have another recession," while under her plan, "we will have 10 million more jobs because we will be making investments where we can grow the economy.” While one report by an economist did state that Trump's plan would cost 3.5 million jobs, it also said his plan was unlikely to get passed by Congress, Kessler and Lee write. The report also said Clinton's plan would add 3.2 million during her first four years, with an additional 7.2 million from anticipated growth. The report also said her plan would face roadblocks to get through Congress. Trump has since released a new tax plan.

Trump denied that he ever said climate change is a hoax perpetrated by the Chinese, reports FactCheck.Org. In 2012 "he tweeted that the Chinese had created global warming but later said he was joking." Trump also "claimed 'the record shows' he was opposed to the Iraq War before it started, but there is no record of that."

Clinton stretched the truth on her statements about her 2012 praise of the proposed Trans-Pacific Partnership, Kessler and Lee write. When Trump said she called it "the gold standard of trade deals," she claimed she said, "I hoped it would be a good deal, but when it was negotiated.” Kessler and Lee write, "But the fact is she never used the word 'hoped.' Instead, she was more declarative, using the phrase 'gold standard' when she was secretary of state."
Written by Tim Mandell Posted at 9/27/2016 12:50:00 PM