More than half of 2.2 million people who need opioid-addiction treatment are not receiving care

More than half of the 2.2 million Americans who need treatment for opioid addiction are not getting it, Christine Vestal reports for Stateline. "A fragmented treatment system, widespread bias against addiction medications and a shortage of trained workers often thwart those seeking help. Instead, they show up in emergency rooms, or reach out to local doctors, nurses and clergy."

Opioid and heroin addiction can be treated with methadone, buprenorphine and Vivitrol, drugs "that have proven more effective at keeping people from abusing drugs than abstinence and 12-step therapies that don’t include the medications," Vestal writes. But not everyone is in favor of using medication to treat addiction, which has led some to turn to spiritual-based recovery programs.


Dr. James Becker, medical director of West Virginia’s Medicaid program and professor of family medicine at Marshall University, told Vestal, "Many people believe that substance abuse is a weakness of personality and that a person needs to get a handle on their disease, and in that sense, they think that relying on a drug that replaces the drug of abuse is somehow a weakness. That’s not the view of most people in the medical community. We understand that addiction is a disease, and that there are a lot of treatments out there that work for some and not for others.” (Stateline graphic; click on it for a larger version) 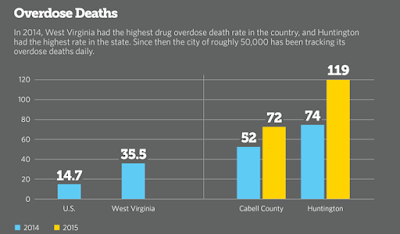 West Virginia, which has the nation's highest rate of overdose deaths, "is one of the 17 states where Medicaid does not pay for methadone, and it has had an adversarial relationship with methadone clinics for decades," Vestal writes. "Methadone clinics weren’t allowed in the state until 2001, and after nine for-profit clinics set up shop in West Virginia, the Legislature in 2007 placed a moratorium on opening any more."

Becker said that of the state's 300 physicians with a license to prescribe buprenorphine about 100 serve Medicaid patients, Vestal writes. He said that while most doctors who prescribe buprenorphine, typically sold as Suboxone, "do a good job of providing counseling, group classes and drug screenings to ensure patients are using it as prescribed and staying in recovery" the state has a number of cash clinics that "provide little counseling and fail to adhere to national protocols requiring drug screenings . . . These practices require a monthly cash payment of $300 or more in advance and usually give patients more medication than they need. That allows many of them to end up selling their extra doses on the street." (Read more)
Written by Tim Mandell Posted at 9/26/2016 01:52:00 PM