Youth suicide rates up in at least 36 states; some blame decline in prescribing antidepressants 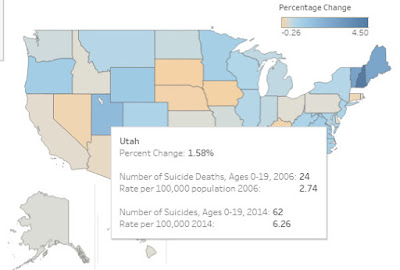 Experts site a decline in psychiatric medicine for the increase in suicides, Ollove writes. In 2003 the U.S. Food and Drug Administration issued warnings that antidepressants may increase the risk of suicide in teens and adolescents, leading many doctors to stop prescribing them. A study in 2003-04 linked higher rates of teen suicide to the decreased prescribing of antidepressants. Experts say another possible cause for the rise in teen suicides is in increase of cyber-bullying.

One study in rural Wisconsin linked higher teen-suicide rates to rural areas, "where people are more likely to be depressed and mental health services may be less accessible," Ollove writes. In Utah, for example, "public schools are barred by law from 'advocating homosexuality," which, critics say, discourages any candid conversation on the subject" and leaves LGBTQ youth with no support system. Utah does not track suicides by sexual orientation, so little data exist on that theory.
Written by Tim Mandell Posted at 9/28/2016 12:52:00 PM