Consumer, environment and anti-trust groups say a trio of mega-mergers could hurt small farmers, John Vidal reports for The Guardian. The deals—Bayer is looking to acquire Monsanto, Chem China is acquiring Sygenta and DuPont and Dow are merging—would mean that the three companies would control nearly 60 percent of the world's seeds and 70 percent of chemicals and pesticides used in agriculture to grow food.

Critics say "the three mega-deals have the potential to concentrate political and financial power dangerously and could force more countries to adopt a single model of farming that excludes or impoverishes small farmers," Vidal writes. "With seeds, chemicals, research and lobbying power in the hands of a tiny group of immensely powerful companies, they say, the small farmer will inevitably be blown away, competition could be stifled, and food and farm input prices will rise." 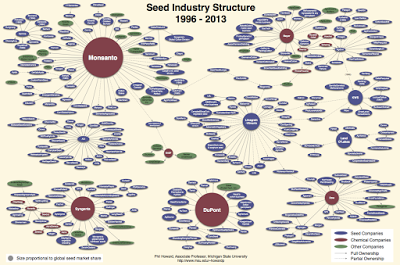 A soon to be published report by the International Panel of Experts on Sustainable Food Systems "is expected to say that “an unprecedented wave of corporate consolidation is under way," Vidal writes. An early draft given to The Guardian says: “New technology and data-driven synergies could lead to three companies controlling 60 percent of seeds and 70 percent of agrochemicals worldwide with still greater oligopoly possible — a historic power shift throughout global agricultural inputs and even greater crop and livestock vulnerability through uniformity."

Pat Mooney, director of the ETC Group, a global agribusiness and agricultural technology watchdog, said "the mergers are linked to companies wanting control of big data and access to patents, gene traits and intellectual property," Vidal writes. Mooney told him, “These deals are not just about seeds and pesticides, but also about who will control big data in agriculture. The company that can dominate seed, soil and weather data and crunch new genomics information will inevitably gain control of global agricultural inputs – seeds, pesticides, fertilisers and farm machinery." (Read more)

Missouri Farmers Union President Richard Oswald wrote in June about the dangers of the mergers to farmers.
Written by Tim Mandell Posted at 9/27/2016 12:22:00 PM