Rural philanthropy is severely lagging behind metro and suburban areas, Rick Cohen reports for Nonprofit Quarterly. The publication wrote in July 2013 that philanthropy can bridge economic, social and cultural gaps, bringing people of differing backgrounds together to form a common bond.

But money going to rural areas keep declining, Cohen writes. In 2011, grant money in rural development decreased by 3.45 percent, "despite a huge 43.4 percent increase in overall foundation grants between 2004 and 2008."

In 2013, Nonprofit Quarterly examined "grantmaking to the top 67 rural CDCs as reflected in their prominent as grantees of Rural LISC or identities as Rural NeighborWorks groups and found that when PRIs and other non-grant assistance was removed from the calculations, these top-notch groups had seen sizable decreases in their foundation support in 2010 and 2011," Cohen writes. "For 93 Rural LISC and NeighborWorks groups, their non-governmental support between 2009 and 2011 dropped 12.6 percent."

"Summarizing other reporting we have done on rural philanthropy comes out roughly the same, a picture showing that the philanthropic resources devoted to rural America have not kept up with the moneys flowing to metropolitan and suburban locales," Cohen writes. "No one should think that philanthropy is doing a bang-up job in urban areas either when it comes to issues of community development, poverty and affordable housing, but the data, even if limited, make it clear that, just like in job creation, rural is falling behind in its access to philanthropic grants." (Read more) (U.S. Department of Agriculture map) 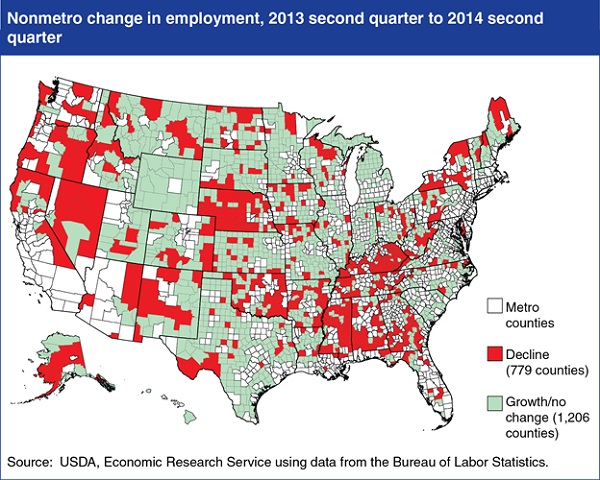