Last year's brutal winter caused a high number of school snow days in many areas. This forced many districts to scramble to make up days and led some schools to cancel spring break or to have students remain in school several days—or even weeks—into scheduled summer vacation, moves that resulted in low attendance rates and hurt state funding, Adam Beam reports for The Associated Press. 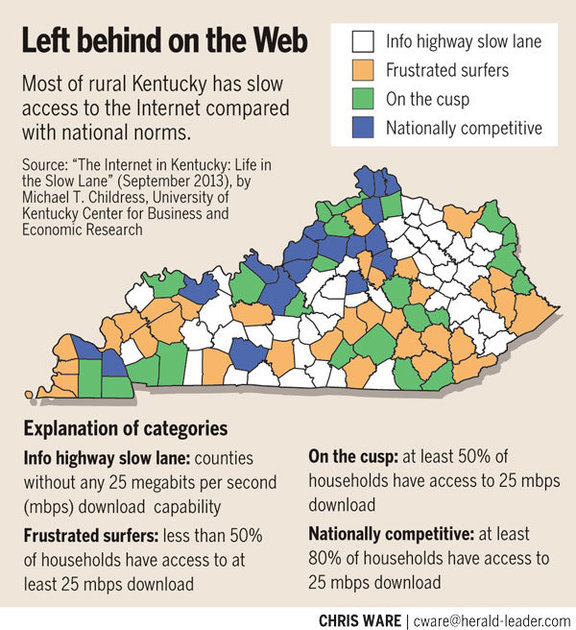 Fearing another snowy winter, Kentucky has come up with a plan to combat lost school days, Beam writes. The state's solution to wintry weather is to have students in 13 districts be home-schooled mainly via the Internet. That seems like a sound idea, until one takes into consideration that some students—especially those in impoverished areas—don't have computers or access to the Internet. Kentucky ranks 46th in availability of high speed Internet. (Lexington Herald-Leader graphic)

Still, the state needed an answer to the possibility of another bad winter, like the one last year that caused four times as many snow days as the year before, with some schools canceling more than a month a school, Beam writes.

Kris Amundson, executive director of the National Association of State Boards of Education, said Kentucky is the first state to tackle the issue, Beam writes. Amundson told Beam, "Everybody in the world is struggling with the same issue . . . and the early cold weather here now is, I think, making people feel even more of a sense of urgency about it. I think people will be really happy to let Kentucky go first and see how it works."

As part of Kentucky's plan, students can "complete assignments from home either by downloading them or working from packets prepared and sent home ahead of time," Beam writes. "In exchange, the state will forgive up to 10 makeup days." But the downside is that "districts that opt to use the home school option would lose state transportation dollars and federal money for free and reduced lunches. Losing those dollars would hurt in a state that the Center on Budget and Policy Priorities says has cut K-12 education funding by 11.4 percent since 2008, among the deepest cuts in the nation."

Tim Bobrowski, Owsley County superintendent, said he hopes to be able keep some of that aid, Beam writes. "Though school buses might not be able to ply all the county's side roads to bring kids to school on snow days, education officials might still be able to deliver meals to the students at some central locations, such as community centers, he said. He has asked the federal government for permission to be a bit flexible with the meals." (Read more)
Written by Tim Mandell Posted at 12/02/2014 02:17:00 PM