Grain farmers who decided to store bumper crops instead of selling them at reduced prices are now reaping the rewards for patience, while foiling investors who predicted a drop in prices, Jacob Bunge and Jesse Newman report for The Wall Street Journal. Midwestern farmers who held onto their crops are now seeing a 15 percent rise in corn futures and a 10 percent rise in soybeans "that is also the result of a slow U.S. harvest and gains in other agricultural markets."

"Corn’s gain over the roughly two-month harvest period of October and November was its largest for that span in eight years and second largest in more than three decades, while soybeans’ climb was the biggest in five years," Bunge and Newman write. "Farmers have also helped create losers out of investors and trading firms that had bet that record harvests of 14.4 billion bushels of corn and nearly 4 billion bushels of soybeans this year, forecast by the U.S. Department of Agriculture, would keep pressure on prices." (Journal graphic) 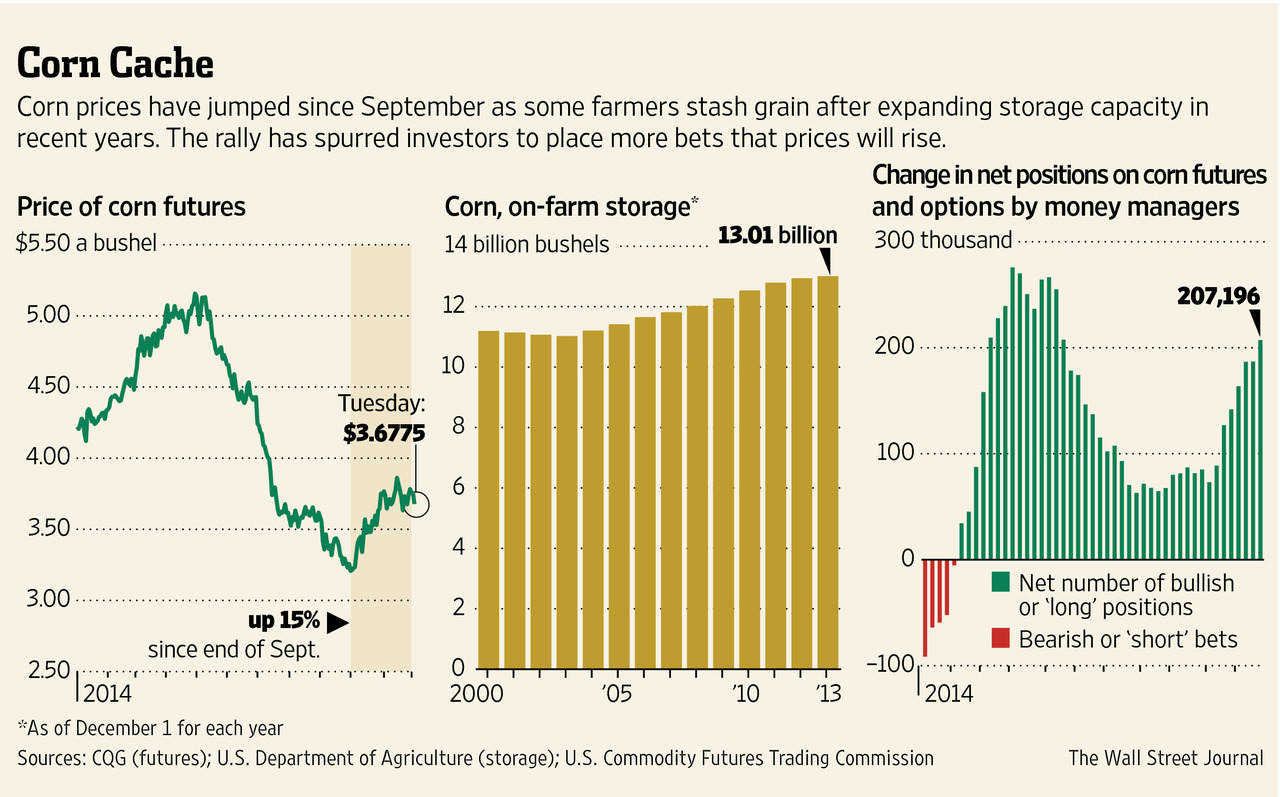 Agricultural-trading firm Global Ag LLC suffered a 19.1 percent decline in its main trading fund in October and 10.9 percent in losses in 2014 through October, Bunge and Newman write. Bharwani Asset Management LLC lost 22.6 percent in its grains-focused strategy in October, and Skyline Management Inc., an investment firm in Mancos, Colo., reported a 7.1 percent decline in October for one of its ag-futures-focused strategies.

Some firms did come out big, with County Cork LLC, based in suburban Chicago, gaining 22.5 percent in October, "thanks to well-timed bets on soybean markets, said Ron Anderson, the fund’s manager," Bunge and Newman write.

"On Tuesday, corn for December delivery, the front-month contract, fell 7.75 cents—or 2.1 percent—to $3.67 ¾ a bushel at the Chicago Board of Trade, pressured by concerns about the strength of demand for U.S. grain," Bunge and Newman write. "The seven-week-long rally for corn—the U.S.’s biggest crop by value—has cut its year-to-date price decline to roughly 13 percent. Last year, corn prices tumbled 40 percent as farmers collected a record crop."

"Soybeans for January delivery, the front-month contract for that commodity, dropped 21.25 cents—or 2.1 percent—to $9.95¾ a bushel on Tuesday, due in part to favorable weather for crops in Brazil, the U.S.’s main rival in soybean production," Bunge and Newman write. "The recent upswing also stems from wet weather that delayed this fall’s harvest and higher prices for related commodities such as soybean meal." (Read more)
Written by Tim Mandell Posted at 12/04/2014 04:28:00 PM