Miners in the Iron Range have higher than expected rates of cardiovascular disease, lung cancer and a rare cancer known as mesothelioma, says a six-year study by the University of Minnesota released on Monday, Dan Kraker reports for Minnesota Public Radio. "University researchers, however, said they were unable to pinpoint an exact cause of the diseases." 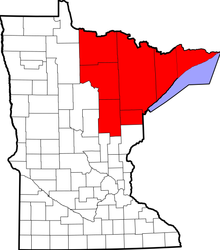 "For decades, some miners have wondered if microscopic needle-like fibers found in the dust of crushed taconite iron ore can lodge into workers' lungs and cause respiratory diseases including mesothelioma, a deadly cancer of the lining of the lungs that's killed 80 former mine workers on the Iron Range," Kraker writes. (Wikipedia photo: Iron Range)

"The $4.9 million study, which began in 2008, linked time spent working in the taconite industry to a higher risk of mesothelioma," Kraker writes. "It found every year spent working in the industry increased the risk of contracting mesothelioma by 3 percent and that Iron Range mine workers suffered the disease at three times the rate of Minnesota's general population. It also linked exposure to the tiny fiber-like particles to mesothelioma." (Read more)
Written by Tim Mandell Posted at 12/02/2014 02:17:00 PM