With no hope of gaining Senate control, Dems have little interest in Louisiana run-off election

UPDATE: Dec. 8: Sen. Mary Landrieu conceded the election to Rep. Bill Cassidy on Saturday night, The New Orleans Advocate reports. "With 3,897 of the state’s 3,931 precincts reporting, Cassidy, a Republican from Baton Rouge, had 702,087 voters or 56.78 percent of those cast. Three-term incumbent U.S. Sen. Mary Landrieu, a Democrat from New Orleans, had 534,331 votes tallied."

Even though Republicans already gained control of the Senate, one key race still remains. It concerns the last remaining Democratic Senator in the Deep South, who has received little support from her own party and who has continued to fall behind her Republican challenger and the strong backing he has received. 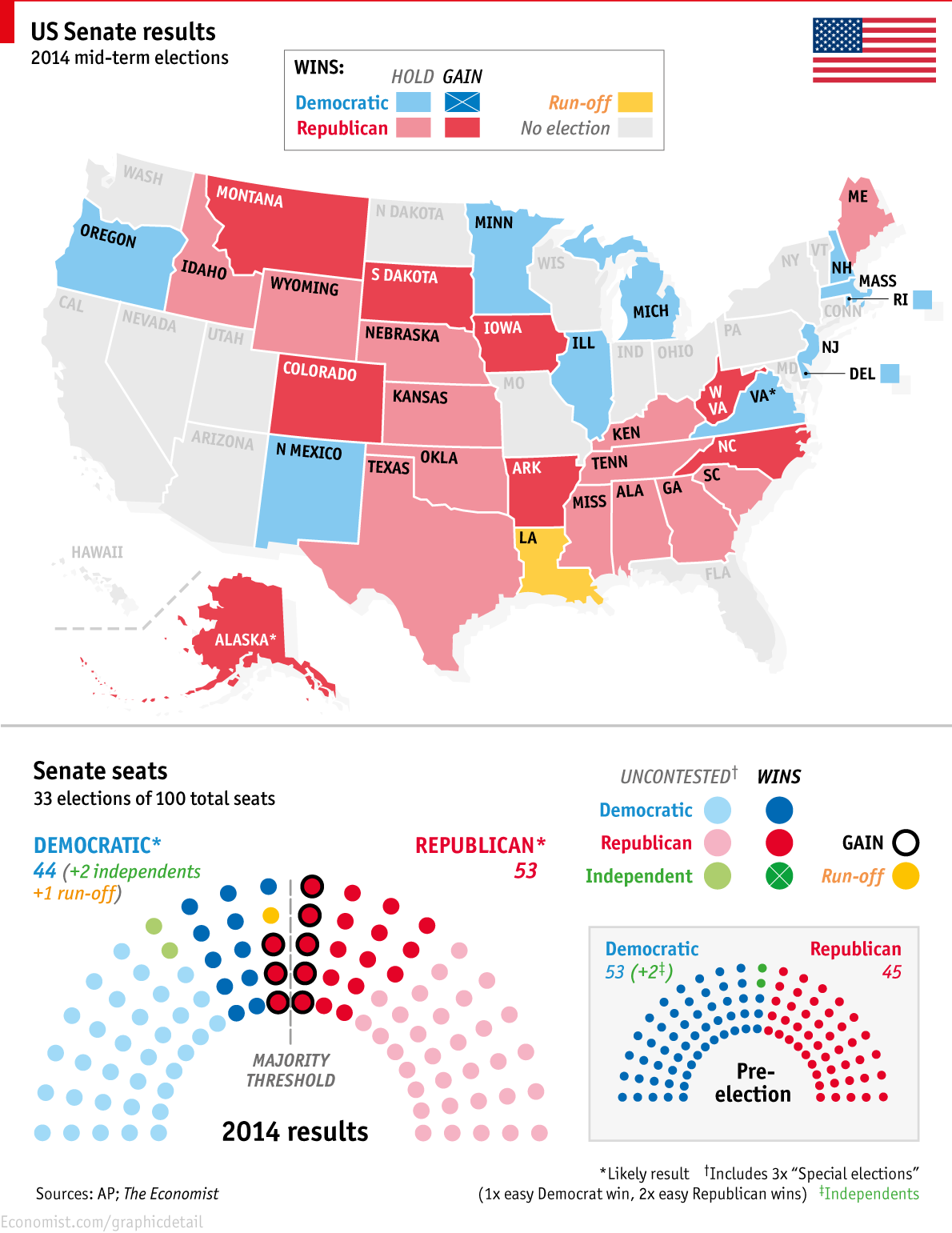 On Saturday, Louisiana residents will go to the polls for a run-off election featuring incumbent Democratic Sen. Mary Landrieu—who co-sponsored the Keystone XL Pipeline bill—and challenger Rep. Bill Cassidy. Though he has been in office since 1997, Landrieu is expected to lose big, and because of that, Democrats have shown little interest in the race. (Economist graphic)

Groups backing Landrieu have aired only 100 ads for her, while conservative groups have aired about 6,000 commercials attacking her, with conservative group Ending Spending Action spending almost $600,000 on negative Landrieu ads in the past week. Bruce Alpert reports for The Times-Picayune. Landrieu's support of the pipeline has helped her receive donations from energy companies, but other than that, she has mostly been on her own.

As far as her own party is concerned, Landrieu's Senate career is already presumed dead, Sean Sullivan and Karen Tumulty report for The Washington Post. "The Democratic Senatorial Campaign Committee canceled its plans to buy ads and is not lifting a finger—or writing a check—to save her. Nor are any of the heavy-hitting Democratic outside groups."

"So with the odds stacked heavily against her, Landrieu soldiers on virtually alone—this year’s political equivalent of those holdout Japanese infantrymen who were discovered waging war on remote Pacific islands decades after World War II had ended," the Post writes.

In fact, Landrieu is trailing Cassidy by double digits in every poll, Timothy Carney reports for the Washington Examiner. Polls have Cassidy leading by anywhere from 11 to 26 points.
Written by Tim Mandell Posted at 12/05/2014 01:57:00 PM