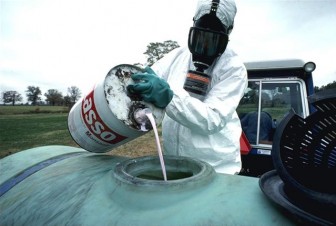 Farm runoff pesticides in rivers and streams pose a threat to aquatic life, mostly because the U.S. Interior Department lacks the funds to monitor all the pesticides used in agriculture, says a study by the U.S. Geological Society, which is part of the Interior Department. (U.S. Department of Agriculture photo: Hazardous herbicide being poured to be sprayed on food crops)

The study found that "the agency can afford to monitor 'less than half of the more than 400 pesticides currently used in agriculture, and monitoring focused only on pesticides dissolved in water,'” Eric Freedman reports for the Great Lakes Echo, a service of the Center for Environmental Journalism at Michigan State University.

"U.S. farms use more than half a billion pounds of pesticides each year to boost crop production and reduce insect-borne disease," Freedman writes. The study says that “Some of these pesticides are occurring at concentrations that pose a concern for aquatic life."