Climate change could lead to megadrought in West, Southwest from 2050-2099, study says

The drought in the Southwest and West has hit record levels in California, is drying up the Colorado River Basin and is shrinking the cattle industry in Texas, as well as causing damage throughout the entire region. But researchers say this is only the beginning and that there is evidence that climate change is leading to a megadrought "that will grip that region and the central plains later this century and probably stay there for decades," Darryl Fears reports for The Washington Post.

The study by NASA and Cornell University and Columbia University "warned of major water shortages and conditions that dry out vegetation, which can lead to monster wildfires in southern Arizona and parts of California," Fears writes. "Megadroughts are sustained periods of sparse precipitation and significant loss of soil moisture that span generations, about 10 times as long as a normal three-year drought."

Researchers say there is an 80 percent chance that a megadrought will occur between 2050 and 2099  "unless world governments act aggressively to mitigate impacts from climate change," Fears writes.
"North America’s last megadroughts happened in medieval times, during the 12th and 13th centuries. They were caused by natural changes in weather that give megadroughts a 10 percent chance of forming at any time." (Post map: To view an interactive version click here) 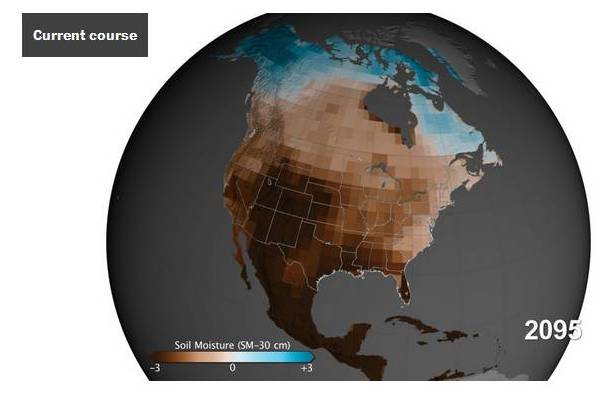 I'd be willing to cover that bet. These predictions are almost universally wrong, spread by the same sort of fear mongers who predict the end of the world.