Tulsa World has published an investigative series studying the rise in Oklahoma's earthquakes and the possible link to the oil and gas industry's use of injection wells for wastewater. In 2014, Oklahoma led the lower 48 states in earthquakes with 585 of 3.0 magnitude or higher, which is more earthquakes than the state had in the past 35 years combined, reports Ziva Branstetter. 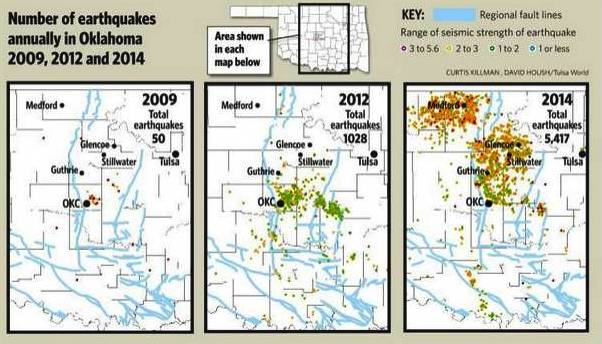 "The state has about 3,200 active disposal wells," Branstetter writes. "The United States Geological Survey and several scientific studies have attributed Oklahoma's spike in earthquakes to these wastewater disposal wells, but key state officials say they need more evidence." Republican Gov. Mary Fallin told the Tulsa World, "At this point in time, I don’t think we have enough information to truly understand what is causing earthquakes. We know a lot of it’s just natural earthquakes that have occurred since the beginning of the earth, but there has been some question about disposal wells."

That's a common response from state officials, despite mounting scientific evidence pointing the finger at injection wells. Oklahoma State University geology professor Todd Halihan, a member of the state's new earthquake committee, said trying to speak to officials about the link between earthquakes and injection wells is similar to the climate change debate because scientific data shows one thing and officials believe another. Halihan told Branstetter, "In terms of the peer-reviewed data sets, I don’t know of a paper that’s not attributing our seismicity to injection."

Fallin formed an earthquake coordinating committee "to gather data and study 'what is causing earthquakes in the state of Oklahoma but to make it factually based and based on science,'" Branstetter writes. But the committee's meetings are not open to the public, six of the 12 members have ties to the energy industry and there are no members from the quake zone. (Tulsa World graphic)

Also:
Read Part 2 of Quake Debate series
Residents' concerns about well 'out of jurisdiction' for regulators
View interactive graphics on earthquakes and injections wells in Oklahoma.
Written by Tim Mandell Posted at 2/09/2015 02:39:00 PM