If the Supreme Court "strikes down tax credits for people buying health insurance on the federal exchange, about 8.2 million" people in 34 states—mostly in the South, could lose their coverage under the Affordable Care Act, Michael Ollove reports for Stateline. "Most of the people likely to be affected are white, employed and low- to middle-class." (Stateline map) 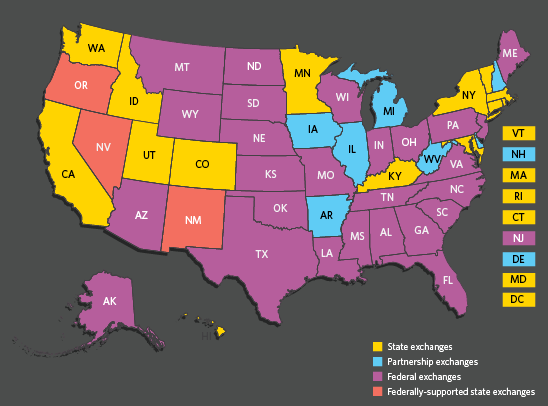 Health insurance rates in the South are expected to rise by as much as 35 percent, making coverage no longer affordable for many people, Ollove writes. "Some believe that if the tax credits are disallowed by the Supreme Court, the underpinnings of President Barack Obama’s signature health care law would collapse."

"At issue in King v. Burwell, scheduled for oral arguments next month, is whether people in states that use the federal government’s exchange to buy insurance are eligible for federal subsidies in the form of tax credits to help them pay their premiums," Ollove writes. "The case hinges on the fact that the ACA provision governing tax credits refers to people enrolled 'through an Exchange established by the State,' without mentioning the federal exchange. The ACA anticipated that all states would create their own state exchanges, but it allowed states that did not want to set up their own exchanges to use the federal one instead."

"In the 34 states where people use the federal exchange, an estimated 9.3 million people are expected to receive $36.1 billion in tax subsidies in 2016," Ollove writes. "A recent analysis by the Robert Wood Johnson Foundation and the Urban Institute estimated that if the Supreme Court blocked these subsidies, 8.2 million of these residents would not be able to find affordable health insurance in 2016." Of those people, 61 percent are non-Hispanic whites, 62 percent live in the South, 71 percent work at least part time and 82 percent are considered to be low- or middle-income rather than poor.
Written by Tim Mandell Posted at 2/11/2015 03:10:00 PM