Rural Nebraskans could soon have a much easier way to vote. Lawmakers are going to vote on a proposed bill to expand mail-in ballots to all counties, Grant Schulte reports for The Associated Press. Secretary of State John Gale said the move would save money and increase voter turnouts in areas with poor roads or poor weather.

Under current law, a county can only seek the state's permission for mail-in voting if it has fewer than 10,000 residents, Schulte writes. In Cherry County, where state law requires 17 of 20 precincts to cast votes by mail, voter turnout has increased from 55 percent to 75 percent, county clerk Thomas Elliott said. Gale told Schulte, “It definitely improves the voter turnout because the ranchers and the farmers and small businessmen in those rural precincts are able to cast their ballot by mailing it back. It's been very well-received by the citizens who are in those precincts.”

Oregon lawmakers are proposing to make it even easier for voters, Wilson writes. Secretary of State Kate Brown introduced a bill last week that would automatically add eligible citizens to the register roll.
"Brown said the bill would add an estimated 300,000 voters to the registration rolls by scraping data from the Department of Driver and Motor Vehicle Services." (Bulletin graphic) 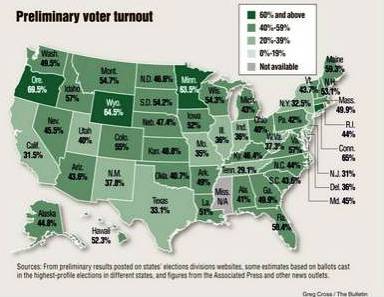