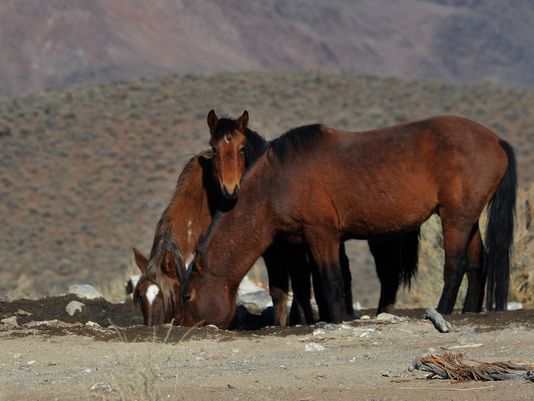 A federal judge has granted animal protection groups Protect Mustangs and Friends of Animals a preliminary injunction to stop the roundup of 332 wild horses in northern Nevada, "saying the government cannot rely on a nearly five-year-old environmental analysis that critics say ignores the latest scientific evidence about the potential harm to the mustangs," Scott Sonner reports for The Associated Press. About half of the 50,000 wild horses and burros on federal lands in 10 states are in Nevada. (Reno Gazette-Journal photo by Jason Bean)

"U.S. District Judge Larry Hicks granted the rare preliminary injunction and temporary restraining order preventing the Bureau of Land Management from gathering the horses in the Pine Nut Range southeast of Carson City and injecting dozens of females with a fertility drug that prevents them from reproducing for two years," Sonner writes. Hicks "said the federal agency appears to have violated federal law, including the National Environmental Protection Act requiring a more stringent examination of the impacts than the one BLM scientists conducted." (Read more)
Written by Tim Mandell Posted at 2/13/2015 12:52:00 PM