Lawmakers in West Virginia—where Republicans recently took control of the House and Senate—"are considering a series of proposals that would weaken a new chemical tank safety law, remove stronger pollution protections for streams across the state and protect the coal industry from enforcement actions over violations of water quality standards," Ken Ward reports for the Charleston Gazette. The proposals come a little more than a year after a January 2014 chemical leak that contaminated the drinking water of 300,000 people in Charleston and surrounding communities. 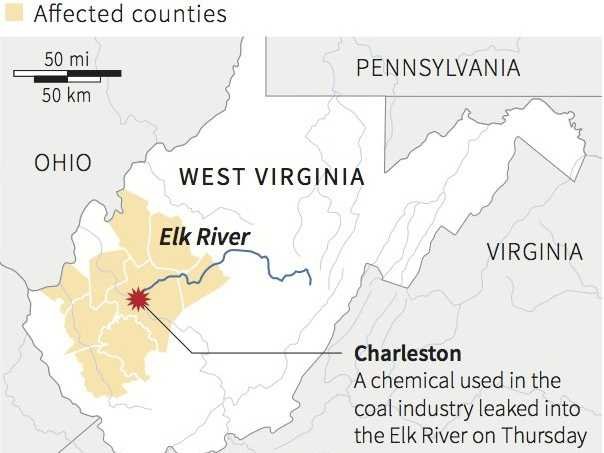 The Department of Environmental Protection rules bill "proposes to add drinking water protections to the part of the Kanawha River that flows through downtown Charleston," Ward writes. "Last week in the Senate, a committee began considering an amendment from the GOP-controlled majority that would not only remove the drinking water protections the DEP wants for the Kanwaha from the Senate version of the bill but also end the DEP’s longstanding policy of enforcing the state’s so-called 'Category A' drinking water standards on all rivers and streams across the state." (Business Insider map)

The Senate is also considering the “Coal Jobs and Safety Act," which "is aimed at stopping successful citizen suits brought over mining company violations of Clean Water Act standards where those standards were not specifically written into state DEP permits and prohibiting the DEP from incorporating those standards into future coal permits," Ward writes. "It also includes a long-sought change the coal industry wants to West Virginia’s water quality limit for aluminum." (Read more)
Written by Tim Mandell Posted at 2/10/2015 01:26:00 PM